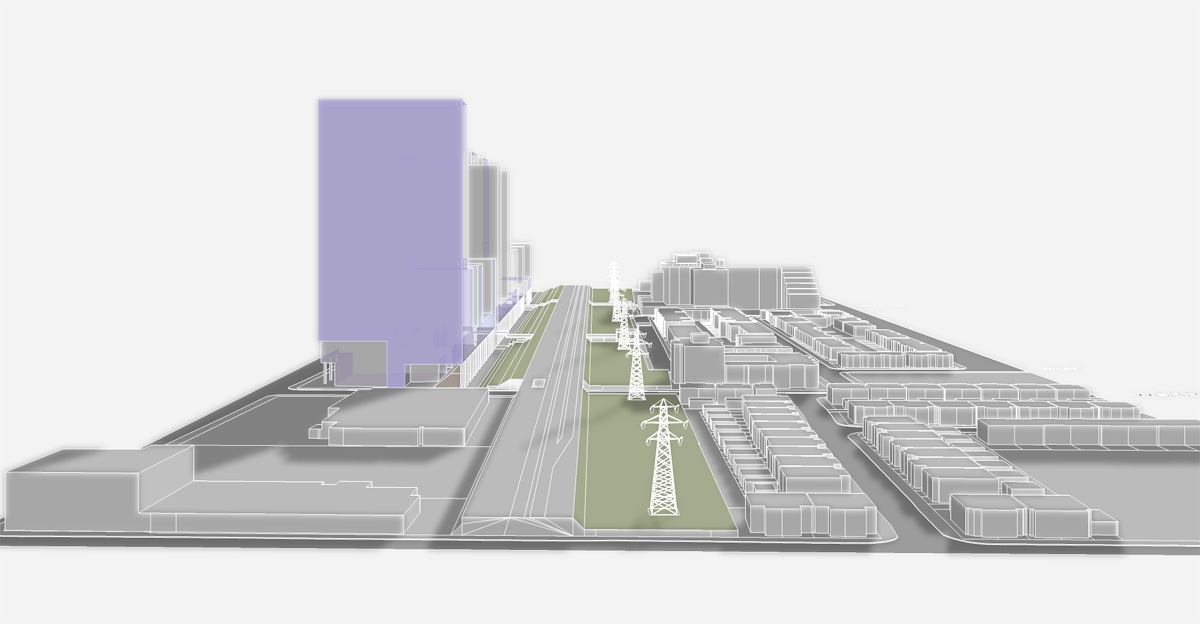 Our office has undertaken an ongoing study of development and public space alternatives for lands adjacent to urban railway corridors. Brown + Storey Architects Inc. are consulting with a variety of partners, including community organizers, members of the development industry, and other architectural and planning professionals, in order to start a conversation on improving the coherence and value of redevelopment projects on rail-adjacent sites.

We are actively seeking the participation of more voices from residents groups, from the development industry and real estate, from small industry and artisans, and from the planning profession.

In recent years, railway safety measures have placed increasing constraints on the plan, building form and program of rail-adjacent developments. Existing approaches to berms and crash walls are producing ugly, inefficient outcomes that rob sites of both development value as well as of their potential to provide civic benefit. In addition, through documents such as Toronto’s Dupont Street Regeneration Study, it has become clear that the municipal planning response to the rail-adjacent situation could be improved and expanded upon with new and less-constrained models.

Simply accepting the existing planning and safety regimes governing urban rail corridors, and the kinds of development that they produce, will squander a substantial portion of the potential development value of rail-adjacent properties, in the form of both private earnings and the public benefits that can accrue from potential improvements to the corridors’ urban form and public spaces.

Our office is producing conceptual techniques and responses for a variety of scales of concern, from the isolated site to major stretches of corridor, such as can be found at present along Dupont Street and in a number of other areas of Toronto (Mt. Dennis, Mimico, Scarborough Junction). The same issues and opportunities also apply in many other Canadian urban centres, where legacy industrial lands adjacent to freight corridors offer the potential not only for redevelopment but for rebalancing public spaces and public connections in what have typically been underserviced and inaccessible parts of the urban grid.

This effort builds on our office’s well of experiences working with and adjacent to active rail lands to produce better public spaces and development plans. Our design for the West Toronto Railpath has received numerous honours, including Toronto and National Urban Design Awards, and has spurred numerous private redevelopment projects on brownfield lands along its lengths. Our office’s “Public Scaffold” proposal was selected as winner of the roadway underpass category of the 2013 Toronto Green Line Ideas Competition, which sought conceptual solutions for a future linear park system along the north side of CP’s North Toronto rail corridor. We have been involved for several years in developing alternatives to standard noise wall solutions along transportation projects, alternatives that can provide improved public value and neighbourhood benefits.

Alongside these public space design efforts, we have engaged in a host of development planning studies on rail adjacent sites, including the old industrial quarter at Carlaw-Dundas (adjacent to CNR Lakeshore East) and the Toronto Transit Commission’s Victoria Park and Warden subway station properties. Our development studies also include brownfield redevelopments in Brantford and Cambridge, and architectural design for higher-density developments in Mississauga.

We expect to be able to reveal more about this project and our findings over the year ahead. Contact us if you would like to tie into our efforts to build a conversation about mending the role of railways in urban neighbourhoods, and to demonstrate better approaches to rail-adjacent redevelopment.