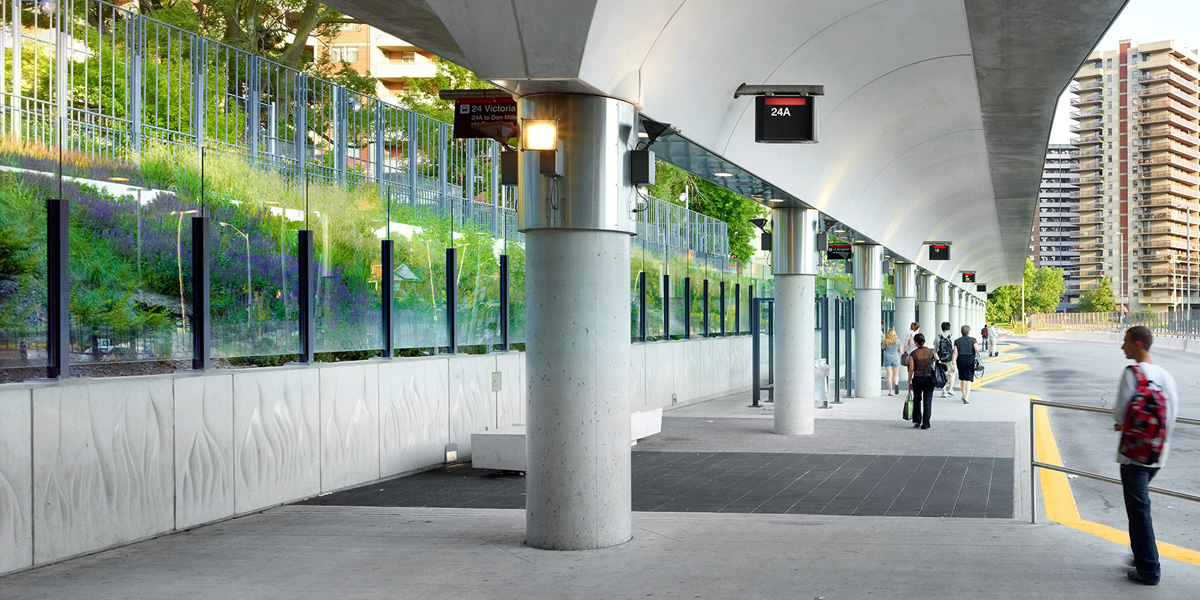 The Toronto Transit Commission’s Victoria Park Bus Terminal Replacement, Station Modernization and Transit Plaza, for which Brown+Storey Architects were the urban designers, has been recognized by the Royal Architectural Institute of Canada (RAIC) with a National Urban Design Award.

The project, completed in 2011, replaced a forbidding set of elevated bus bays with a more welcoming perimeter bus terminal located at grade, and used this replacement to facilitate a series of other improvements to station accessibility, environmental quality and connections to its surrounding neighbourhoods. Victoria Park station was opened up to natural light, to views to the surrounding ravine landscape, and to safe, comfortable pedestrian access for the first time.

The awards jury had the following to say about this much-needed project:

“An iconic piece of urban infrastructure that not only fulfills its transportation function but also demonstrates how such projects can be civic and social infrastructure that provide spaces of commodity and delight in architecture and the landscape. The Victoria [Park] Station provides a model for similar transit infrastructure renewal and enlightened design across Canada.”

The awards honour projects that contribute to the quality of life in Canadian cities, and to their sustainability. This is Brown+Storey’s second National Urban Design Award, having previously been recognized in 2012 for our work on the West Toronto Railpath.

B+SA congratulates the Toronto Transit Commission and the entire design team, including SGA/IBI Architects and Scott Torrance Landscape Architect, on this honour.

The station was the first transit structure in Toronto outfitted with a green roof, a move BROWN+STOREY introduced in feasibility studies for the project. Image courtesy TTC.

The new terminal benefits from robust seating and views to an adjacent planted slope.

The project opened up and added colourful improvements to the elevated pedestrian walkway linking the station and Victoria Park Avenue to the Teesdale Apartments.

People on the walkway now enjoy views to Dentonia Golf Course and the Taylor-Massey Creek valley as well as into the station’s elevated subway platforms, where windows and natural light were added.

Interior upgrades were made to the pedestrian bridge linking Victoria Park station to Crescent Town to the west, including new windows.