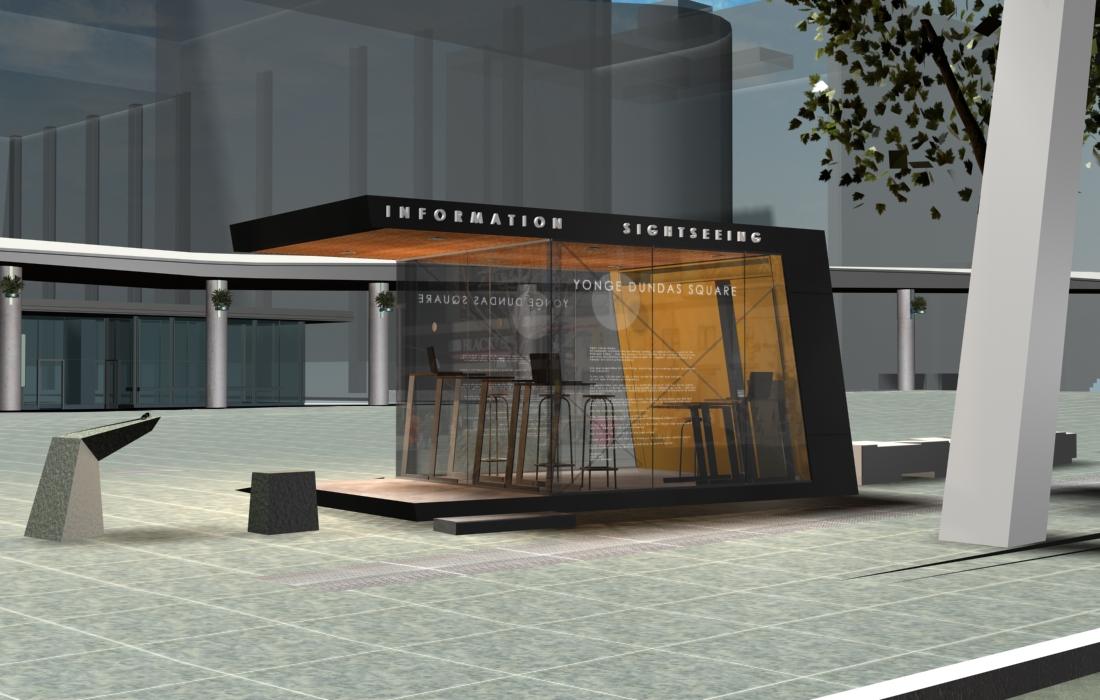 The idea of the new kiosk prototype is to introduce a new and unique structure to Yonge-Dundas Square that is part of the language of the public space and in particular relates to the design aesthetic of its furniture and larger architectural elements.

We are employing a series of techniques in the design of the kiosk that allow it to become a highly flexible and striking element that will participate well both physically and programmatically in both the daily life and special events of the Square. To ensure the compatibility of the kiosk with the unique character of Toronto’s premier public space, we have engaged Brown and Storey Architects Inc., the original architects of Yonge-Dundas Square, whose design work has been recognized, published and awarded internationally. The Brown and Storey office has worked closely with our team over the past several weeks to produce a kiosk design that is an excellent complement and brings an expanded dimension to our proposal that suggests an integration of our presence on the Square with other beneficial uses.

The kiosk is formed by a tilted metal ‘C’ channel that is slightly elevated from the curved granite surface of the Square. The bottom leg of the C channel forms a ground plane that is a continuous surface / raised plinth used for both visitors, the booth interior, and for potential displays.

The C channel is partially in-filled with large moving fully-glazed panels that provide an enclosure when the kiosk is functioning as the Bus & Boat Company booth. When the panels are shifted into their ‘open’ position, the booth is transformed into an effective display surface / pavilion. The glazed panels provide a number of combinations of positions that provide a unique flexibility open to interpretation for special events and the everyday life of Yonge Dundas Square. 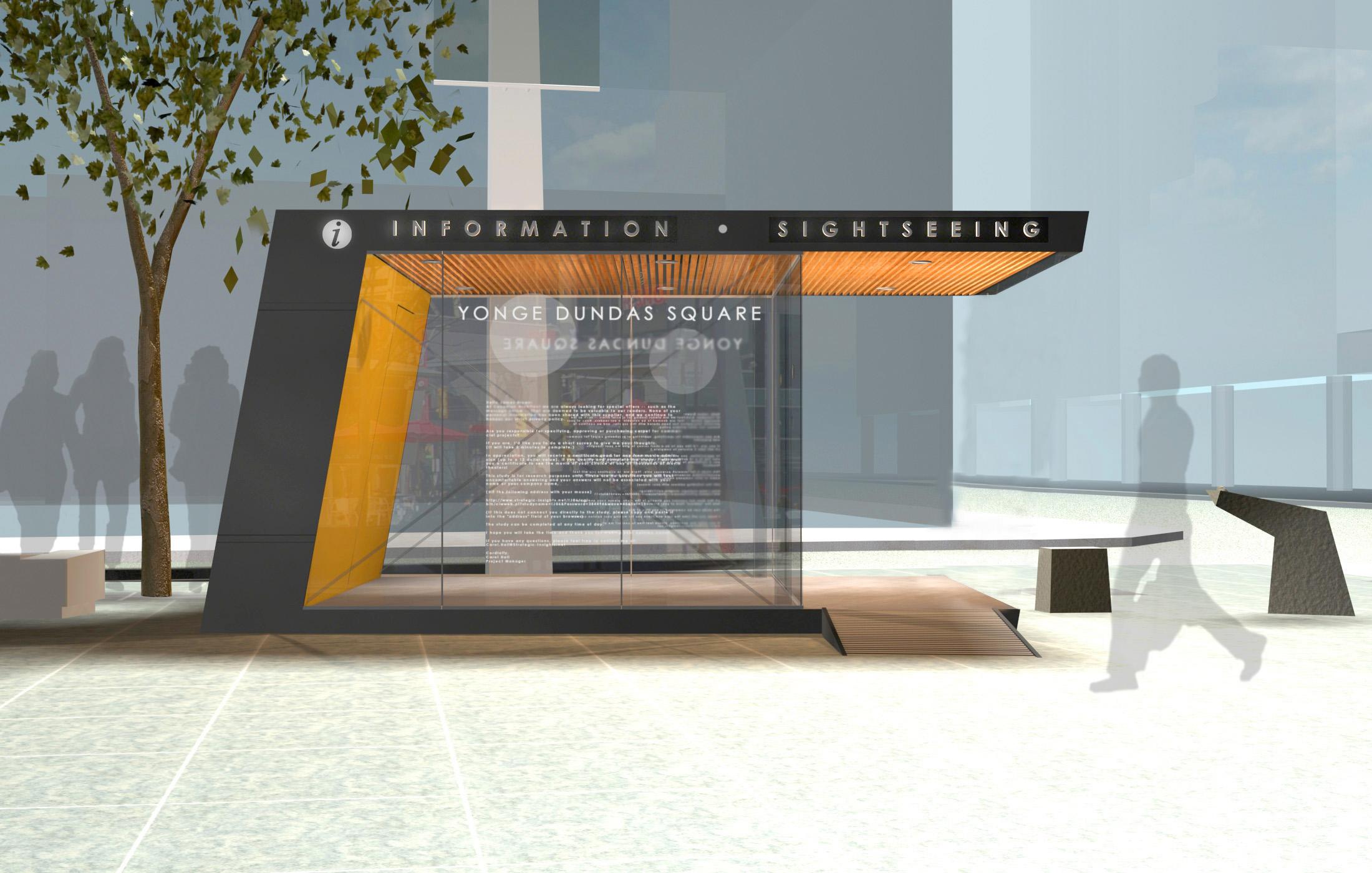 The fully glazed laminated and tempered panels in their closed positions provide a striking transparency during the day that can reflect the public life of the Square – people, fountains, and events. The area of the enclosed kiosk is sized on the existing footprint of the present kiosk – 9’ x 11’. During the evening, the panels allow the booth to be transformed into a lit beacon on the Square. In each case, the minimal nature of the roof, walls and ground planes of the kiosk are carefully aligned with the presence of the other clean and elegant structures of the Square.

The position of the kiosk is suggested to be slightly ‘skewed’ to the interior of the Square, deflecting to the geometry of the major north canopy and the TTC entrance stair. This skew opens the longer face of the kiosk slightly to the pedestrian and vehicular traffic of Yonge Street, permitting the reflection of the fountains and people sitting in the centre body of the Square.

The interior fittings of the kiosk are simply conceived and expressed to show their flexibility – the ticket counters are ‘nested’ to allow them to be folded away into the compressed storage wall at the east face of the structure. Laptop computers will provide compactness and portability of the kiosk equipment. 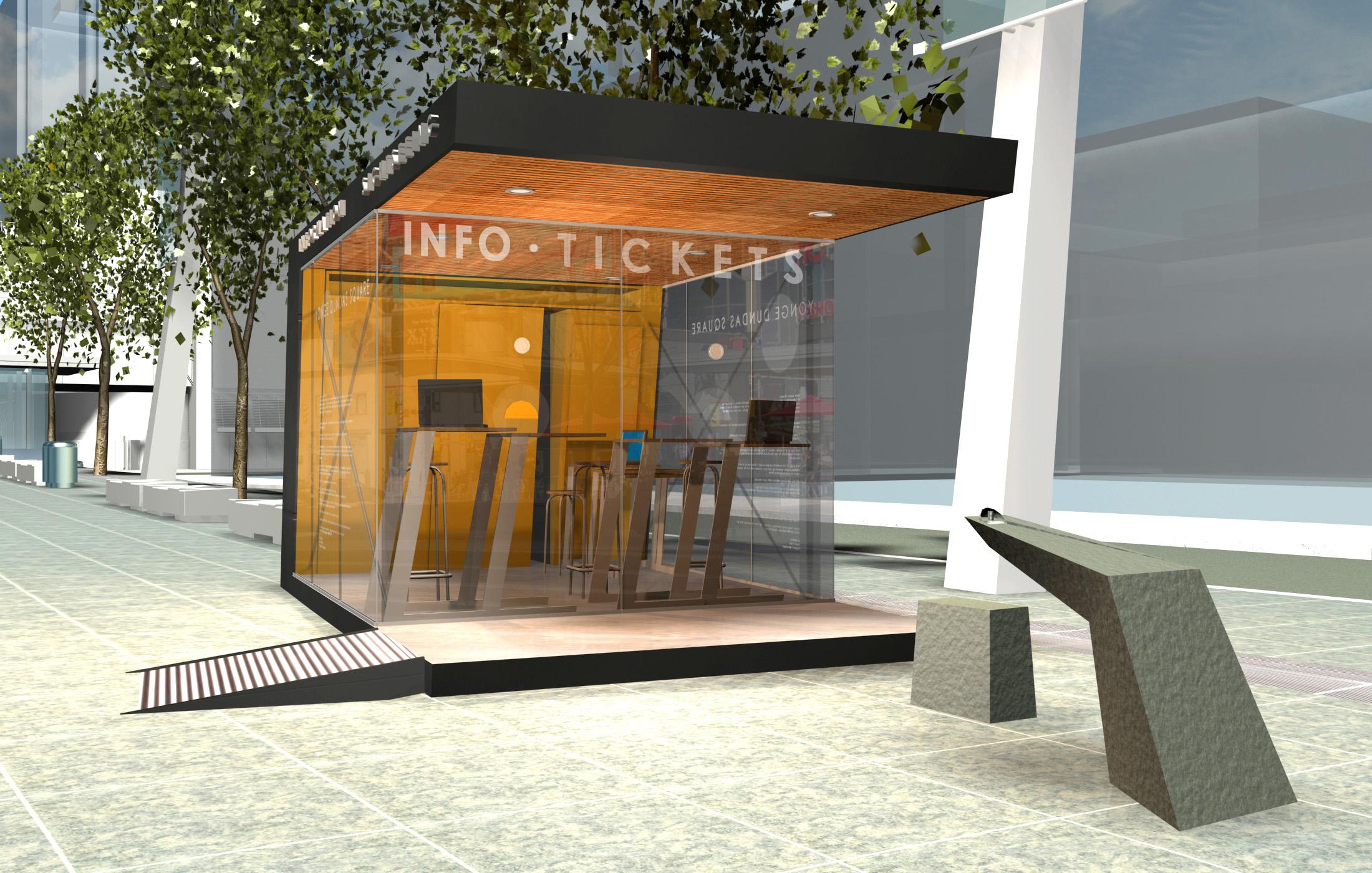 The east wall of the C channel is thickened to provide secure and seamless storage accommodation for coats, counters and stools. An unobtrusive sliding access door to the booth is provided at this wall. The interior wall surface radiates a strong gold colour that is highly visible through the transparent glazed panels. The interior face of the east wall can also become a projection surface for signage and information. A recessed track in the ceiling of the kiosk allows for material drapes to be used to modulate the sunlight coming in to the kiosk during the summer months, and to provide a further sense of enclosure when needed, whether at night to conceal the interior, or during special events when the kiosk is not in use. These material drapes would be of highly colour material that could also carry signage elements. 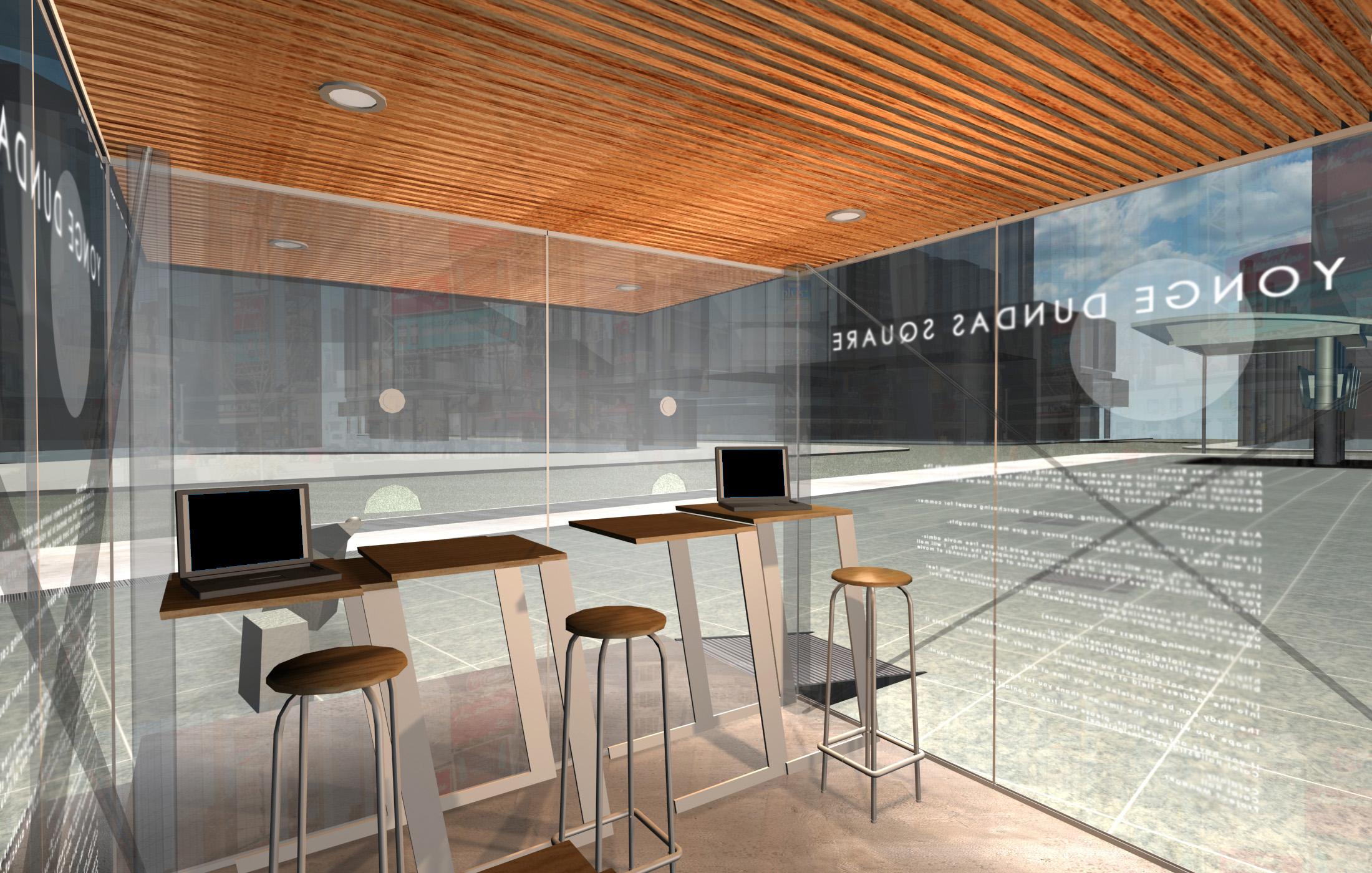 In keeping with the simplicity of the channel form, the signage for the kiosk is shown as separate formed letters securely fastened to the top edge of the channel. Opportunities for signage can be developed on the material drapes, on the exterior east wall, as a project surface on the interior of the east wall, a recessed LED moving panel on the channel’s roof line, or shown as an alternate construction where an inclined glazed panel completes the ‘C’ channel on its open west face. This incline glazed panel provides further shelter by partially enclosing the generous overhang (the top leg of the channel / roof) and creates another unique surface for signage / advertisement for upcoming Yonge Dundas Square events.

Other unique features of this kiosk include the provision of a singular solar collector, an important ‘green’ indicator and valuable contribution to a reduction of the kiosk’s energy consumption. Handicapped accessibility can be provided through the short ramp to the slightly raised west face, and a portion of the portable counters will be sized to accommodate the required height for wheelchair accessibility.