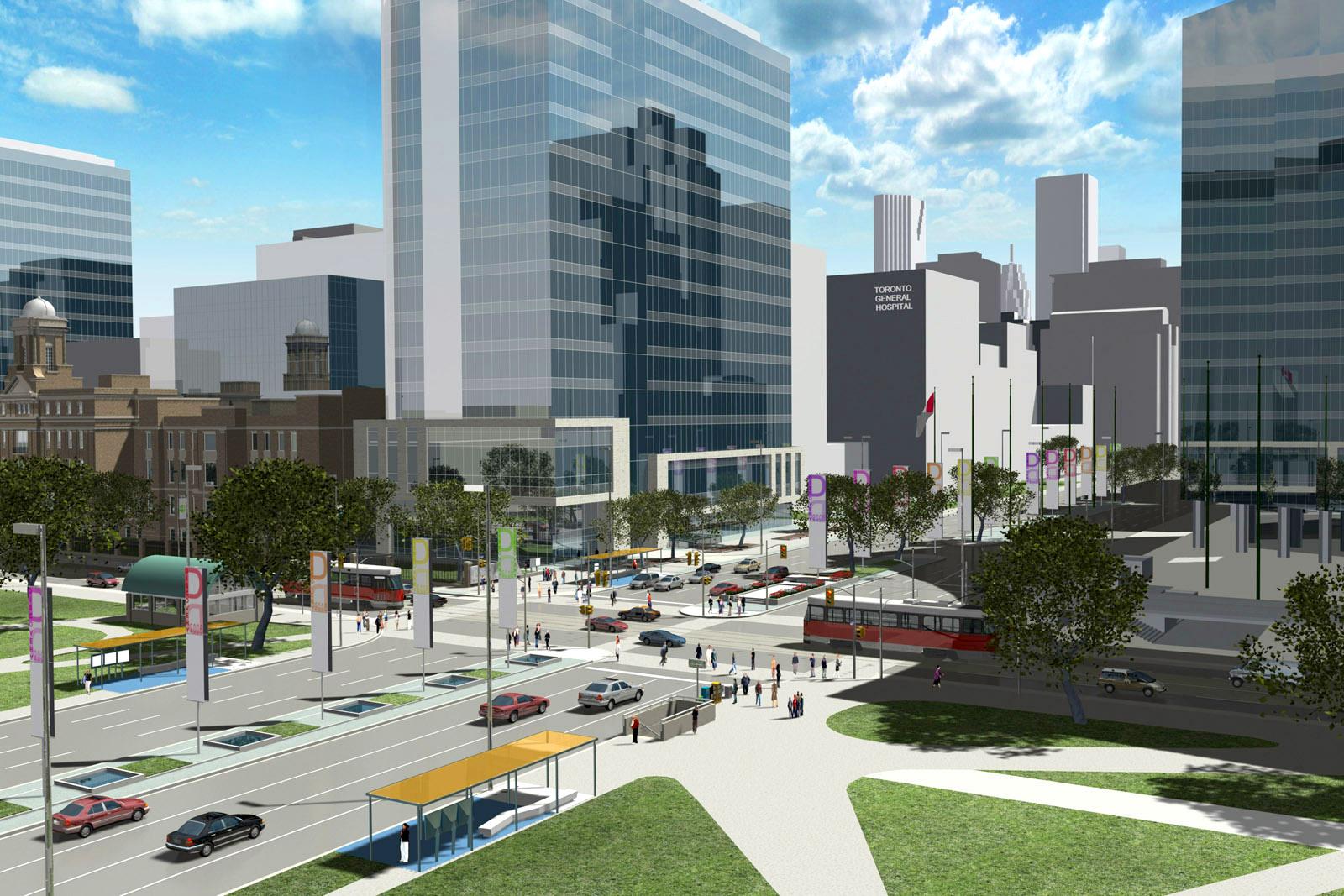 The chief ambition of the Capital Design Strategy for The Discovery District Area is to find the most effective means for the City of Toronto to create a strong identity (or “brand) for the
burgeoning biomedical research industry accommodated in this area of the City, through its urban design elements in the public domain. Although the main industry is the biomedical research
field, the term “Discovery” has been invented by the City to allow a multiplicity of interpretation of different university faculties and cultural initiatives. Our project team have been looking at long term, medium term and short term design strategies to achieve these aims.

The biomedical research industry in Canada is the fourth largest internationally; Toronto has the second largest international concentration of biomedical research. Our aim for this Capital Design Strategy is to build upon the enthusiasm that has been expressed by the Discovery District community to create a public realm that will act as a catalyst and partner to the private realm – attractive to investment, tourism, and the local workforce and citizens.

The Discovery District, as a co-inhabitant with a strong new cultural policy to be instituted along University Avenue, can potentially take good advantage of the Cultural /
Superbuild Renaissance currently under construction. The AGO, OCAD, ROM, CCBR, Pharmacy Building, and the new Opera House, are all either within the boundaries of the Discovery District or at its perimeter. This provides an exciting potential for cultural tourism combined with the biomedical research visitors for commercial / retail programming that will bring the “Florida effect” to the Discovery District. “Cultural attractions and urbane neighbourhoods are an important draw to new industries in North America.”

It is important that visible interventions be determined that can immediately identify and brand the Discovery District in the short term. Many of these strategies have been identified for development in the design phase including:

“The Oculus,” South Humber Park’s pavilion, is a remarkable example of abandoned public infrastructure.
Our recommendations include designating it a #heritage site, restoring the washroom functionality, & improving the building’s prominence in the park: https://bit.ly/3l6wVD6

Here's the link to our Un-Avenues (north-south arterial intensification) article in @Spacing: http://spacing.ca/toronto/2021/07/16/the-un-avenues-integrating-new-intensity-for-housing-open-spaces-and-streets/

Good column but ...
1. There's strong chance north-south streets with those Bloor-Danforth subway stations would be better and easier to develop with more density, if only Toronto's official plan allowed it. @BrownStorey @BlairScorgie
https://www.thestar.com/news/gta/2022/06/25/on-the-danforth-jumbled-logic-sees-one-building-staying-up-while-another-comes-down.html?utm_source=Twitter via @torontostar

“The Oculus,” the mid-century modern pavilion

Our master plan for Tecumseh Park in Chatham-Kent

Roseneath Park at St. Clair West and Oakwood is is

Learn everything you need to know to support essen