The name for this project, Restless Ecologies, refers to a primary focus: anticipating a constant movement and exchange – a restlessness – of actions and reactions in an ever evolving interconnected set of ecologies: ecologies that encompass water, energy, biodiversity, social interactions, active transportation, habitat, sacred and native, entertainment, games, events, shelter, cultural production, and commerce. All of the initiatives and elements suggested are considered as integrated layers of infrastructure to strengthen and transform the relationships of University to landscape, land to water, and the full animation and habitation of neighbourhoods, communities, and institutions. The theme of Restless Ecologies is developed through the following strategies –

The entire boundary of the Fort Garry Campus, Southwoods Community, Smart Park, and The Point is defined by a new linear park – 8 kilometers in length, 34 meters in depth – made up of three double lines of tree planting and an active transportation route for cycling, walking, jogging and vehicles. This membrane simultaneously provides an enclosure and definition to the full site, and a friendly connective ‘tissue’ accessible to the Red River, the Pembina Highway, the Victoria General Hospital, and the adjacent neighbourhoods. The green membrane is echoed at other scales to create successive looping networks throughout the full site. 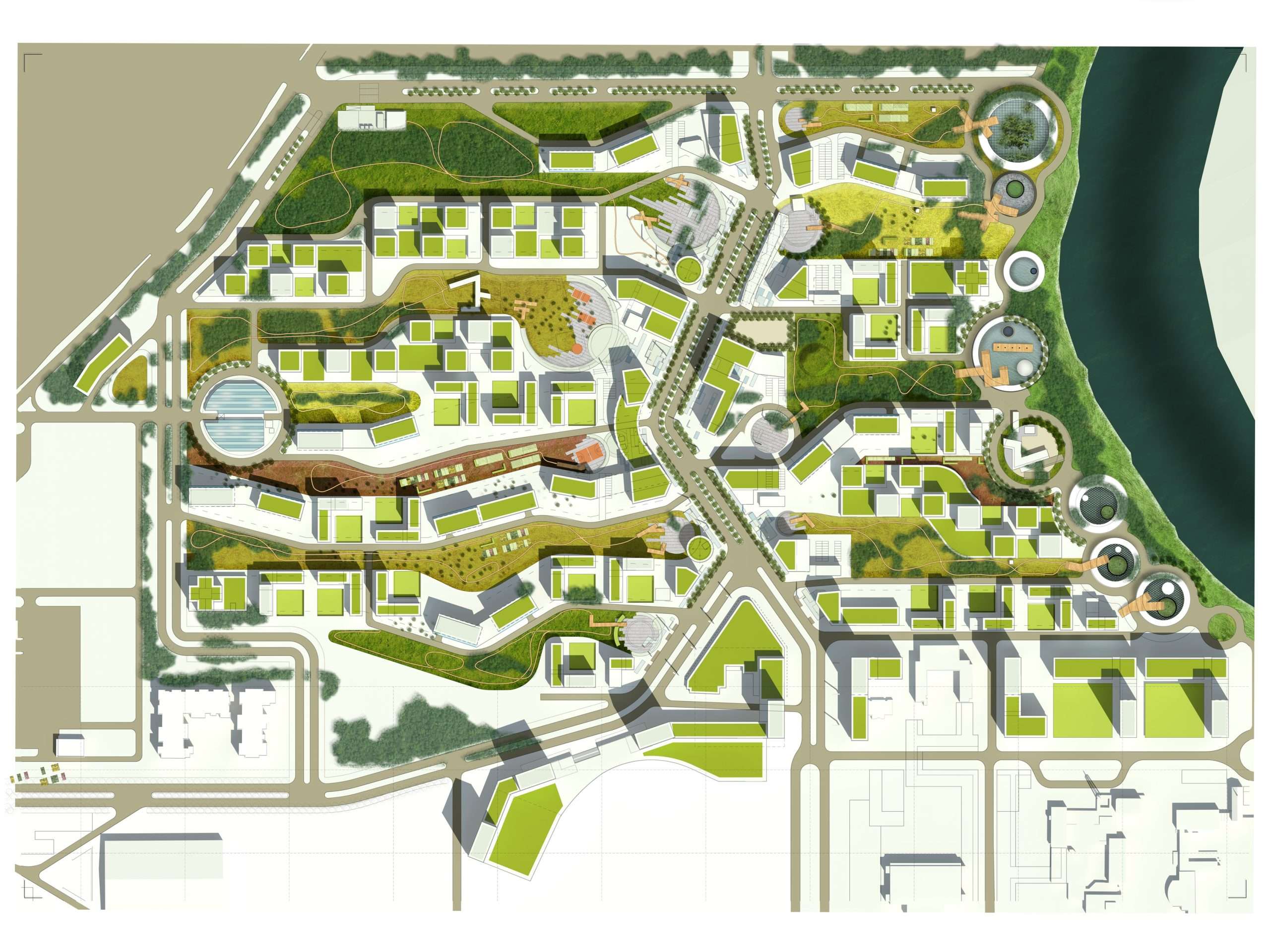 Using both the raised plinth of the Administration Building and the fairways of the original golf course as precedents, the role of landforms is developed and heightened to create relations between buildings and their sites, and sites to the larger whole of the relation of each element ultimately to the water’s edge. Subtle transformations of the landscape through raised inclines (‘taluses’), and plinths, form new addresses and directions east/west while new strata reveals techniques that make vertical distinctions incorporating uses like integrated parking (half-in, half-out), prominent profiles for entrances, and new landscapes for future expansion.

Following the Ecology and Logic of Water:

Each precinct of the site has been redefined by the capturing of flows and orientations of water. The introduction of ‘Pool Rings’ – highly visible and usable public spaces that collect and store water while adding to the public realm – are placed along the Red River banks to bring natural interaction and coordination with flooding seasons while at the same time providing a space of public interaction with the water’s edge – spaces for pause, events, rituals and recreation. ‘Water Squares’, a related type to the Pool Rings, are also introduced into the linear strata of the Southwood Development, creating intermediary points of exchange for rain water collection at the intersection of ‘Main Street’ and the ‘fairway’, connecting eventually to the larger Pool Rings at the river’s edge. The logic and ecology of water is further expressed in the siting of new water treatment and campus infrastructure placements, expansion and new integration of existing campus water features and the built storm water collection systems introduced at green roofs, planters and streets.

The introduction of the Green Membrane and the raised plinths and taluses are combined with new building and open space typologies that create prominent addresses at the entrances to the University of Manitoba Fort Garry Campus, the Southwood Community, the approaches to the Red River, and the new raised overlook of the agricultural fields of the Point. The green membrane structure of enclosures and distinct landforms create a language that can express open-ness, direction, vistas, connection, and importance.

The unique precincts of the University of Manitoba Fort Garry Campus have directed the expanded use of open space, parking and building typologies. In the Southwoods Development, integrated open space and residential typologies for a full range of users – families, students, and seniors – provide a successive relationship between streets to courtyards, to porous building bases, to the green ways and established groves, leading to the banks of the Red River. In the Smart Park and Sports precincts, their integration of facilities has been tied together by striations of landscape, water features and linear building types that have been developed to create integrated public spaces for events, exhibitions and centres for innovative industries.