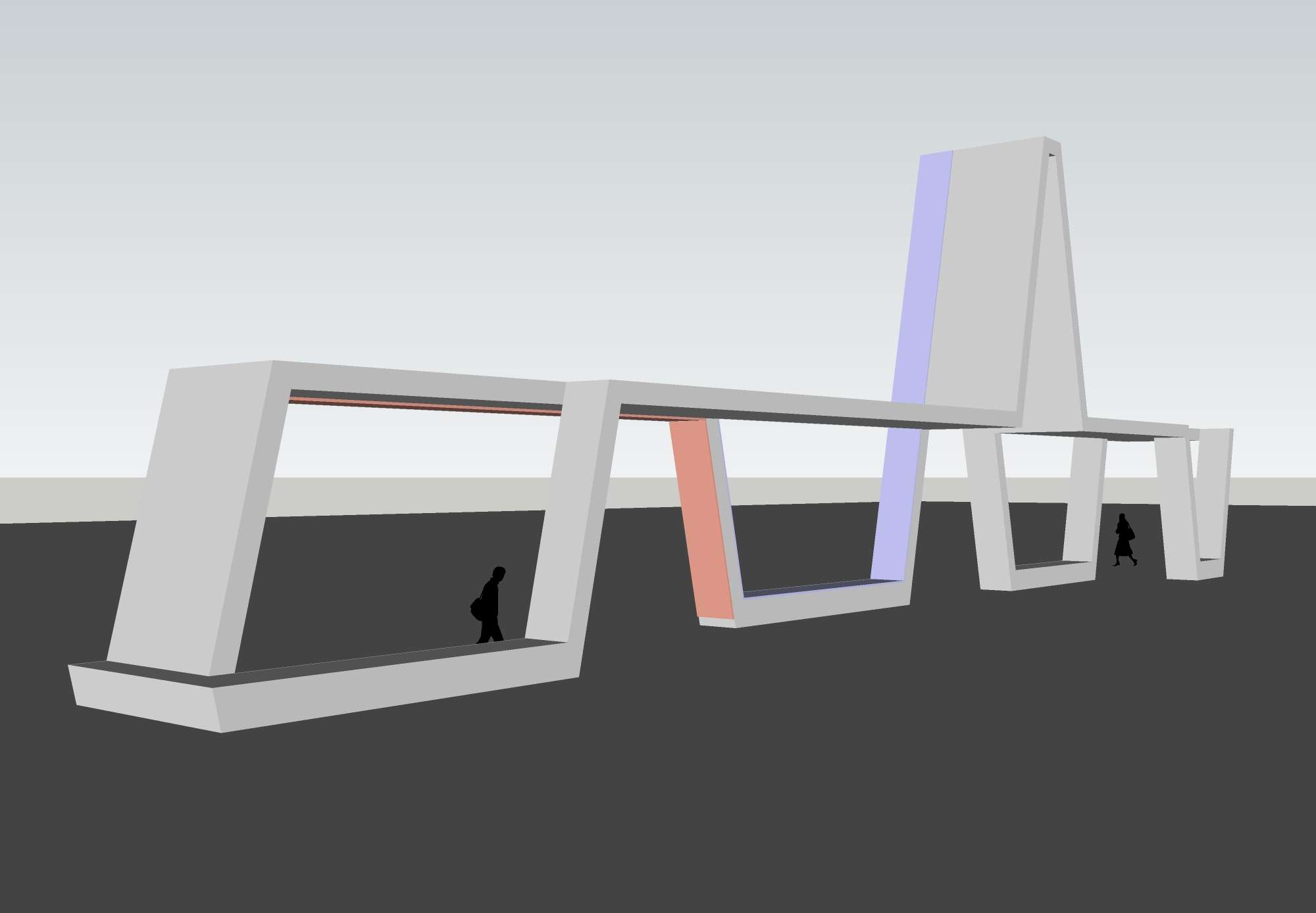 The frieze is legitimate architectural and historical narrative device for telling a story visually in an abbreviated utilization of symbols. It is usually linear in nature and relies on relief and profile. In particular, it is interpreted as a framing and compositional device; as a free standing element it enters into composition with its surroundings. These urban frieze concepts present ideas for architectural devices that function as bus stops, canopies, and elements of the public realm.

Simple variations on a set number of elements, either vertical/upright or italic, form a family of indications and distinctions that can be individualized for each transit stop location. Each variation of the frieze is characterized by a civic scale (i.e., design excellence principles all apply) in which two scales are nested together. The frame and the canopy both act as a frieze in combination; the frame is higher in scale and is meant to interact with the street and the surrounding environment. The canopy as frieze responds to a more intimate and horizontal scale of the infrastructure and comfort requirements of the stop platform and access. The frame as vertical structure is meant to be more robust, simple, economic and frugal; the canopy more fine grain, finished, artistic and modern. In combination, they work both scales.

As structures they are completely interdependent with all elements. The frame is a seating wall and highly interactive structure, incorporating signage, material and colour infills, walls and glass, advertising media, along with ticket and wayfinding systems, all easily and seamlessly incorporated into the frieze structure. Materially speaking, the frames can be interpreted in steel or even mixed materials with wood timber sections are common combinations, the frames can be made into components, bottom sections anchored to footings and upper structure attached or bolted into place.

The idea of creating a place where people might like to spend time conflicts with the conventional notion of transit which calls for moving things along as quickly as possible.

When you put light rail stations/stops there, you are asking people to go to places they’ve never gone to before.

“People want infrastructure to serve its purpose but that has some dedication to aesthetic issues.”

The frieze is the signage, the frieze has colour designations that can be individualized, the frieze is a self-referential system and is understood as part of a system of systems in an environment. They form an order and are seen individually and as a sequence along the entire corridor.

The frieze as a ‘scaffold’ can be extended and built into over time, changing needs for advertising, branding, etc, can be seen as a revenue source for the city, and future user scenarios accommodated by extension to accommodate more heavily used stops over time and future needs.