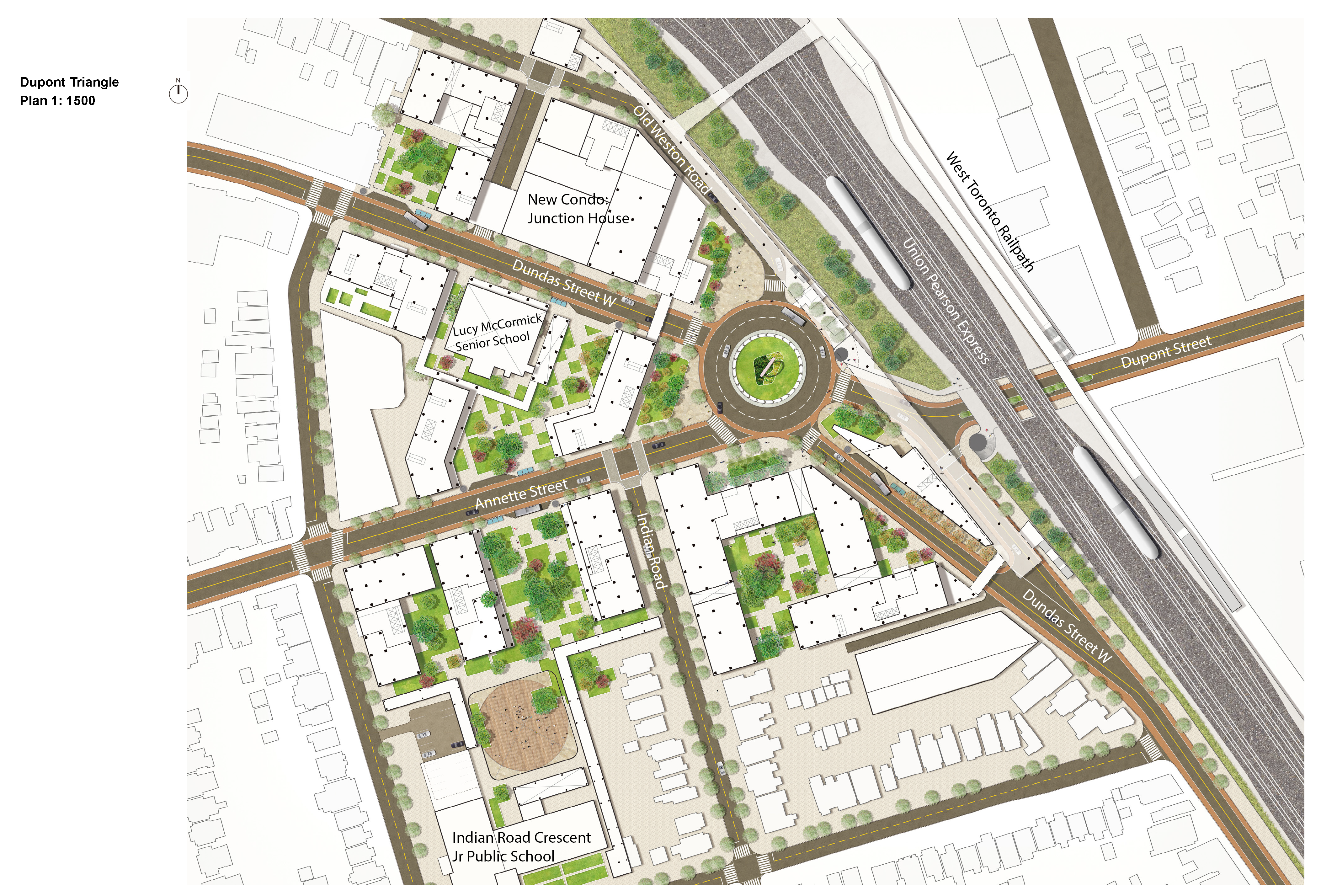 The Dupont Triangle and the Surrounding Precinct

The Dupont Triangle is a proposed developed precinct centered on a new vehicular and pedestrian roundabout. The roundabout is the coming-together of six different streets: Dupont Street, that passes down the rail corridor, Dundas Street West up from Bloor Street, Annette Street, Indian Road, and the Old Weston Road.

Currently, this site runs parallel to the Pearson Airport Rail Corridor (UP Express) and is a clash of diagonal streets and urban blocks. This current organization has not been the result of a conscious designed solution, but rather a series of circumstantial street and infrastructure encounters. In the case of Dupont Street, it has to pass under the railway above. The underpass and the sudden emerging slope of Dupont inevitably obscures the street in a rather undignified manner. When it does emerge, it has to encounter a plethora of diverging streets without any corresponding order or unifying solution.

The proposal at this location for a new, unified public realm for vehicular, cycling, and pedestrian space organizes the six different streets leading into its center. The roundabout is surrounded by six urban blocks of varying sizes that have been designed to form the Dupont Triangle and new public space that encloses around the roundabout. These new urban blocks contain inner courtyard and frontages that form the public face of the Davenport Triangle. New connections between the courtyards at grade form an interconnected system. Additionally, upper linkages across Dupont West connect between the precincts with new, intensified housing typologies.

The former isolated Dundas West “park island,” currently surrounded by traffic, has become a sliver-like structure that partially frames a new, raised pedestrian crossing over the new emerging Dupont Street. This walkway connects northward to a raised tower and bridge that crosses over the rail corridor and connects to the existing West Toronto Railpath.

Currently, the two existing schools are in a condition of complete isolation and separation. In this proposal, the existing two school properties are designed into a more unified network of public spaces; the schools are framed by new buildings and courtyards, connected with new covered walkways, and have improved edges and boundaries.

A number of residential house groupings have been identified for subtraction (see Figure 1 below). These residential buildings can be substituted with small linear structures with courtyards along the Annette frontage (see Figure 2 below). The landscaped courtyard along with improved street frontages and laneways contribute to a unified grouping of buildings that departs from the single-building iteration typical in these marginal locations.

Neighbourhood desirability often centres around adjacent schools and school amenities. The residential subtractions on Annette Street reveal a hidden relationship that could be developed between the two schools, which can be defined by various configurations of towers and courtyards. Between the schools, the width of Annette Street can be reduced in favour of wider sidewalks, improving the safety of mid-street and corner crossing for staff, students, and neighbourhood residents.

Rather than both schools having their own parking lots, the two schools can share one consolidated parking lot. This sharing of parking space would save 39% of the land and benefit both schools as well as the existing and future residents with an enhanced and connected public realm (see Figure 4 below).

Housing: Intensification of the Dupont Triangle

While the new courtyard typologies establish the ground plain and public space, modest and precise towers extend into the metropolitan skyline. Uniform in height, residential the towers are placed to take advantage of sun orientations and visual landmark alignments of both long distance and short distance viewpoints. While the towers create the needed density above the linear courtyard buildings, they create an “in-the-sky” presence for the new Dupont Triangle quadrant.

The Dupont Triangle as new public space is a city building concept that requires a holistic and unified building and spatial approach. The current fragmented and abandoned nature of the former industrial area requires a complete rethink—something more than a solution for a difficult traffic condition, but a program of new civic infrastructure.

Renderings and Drawings of the Dupont Triangle