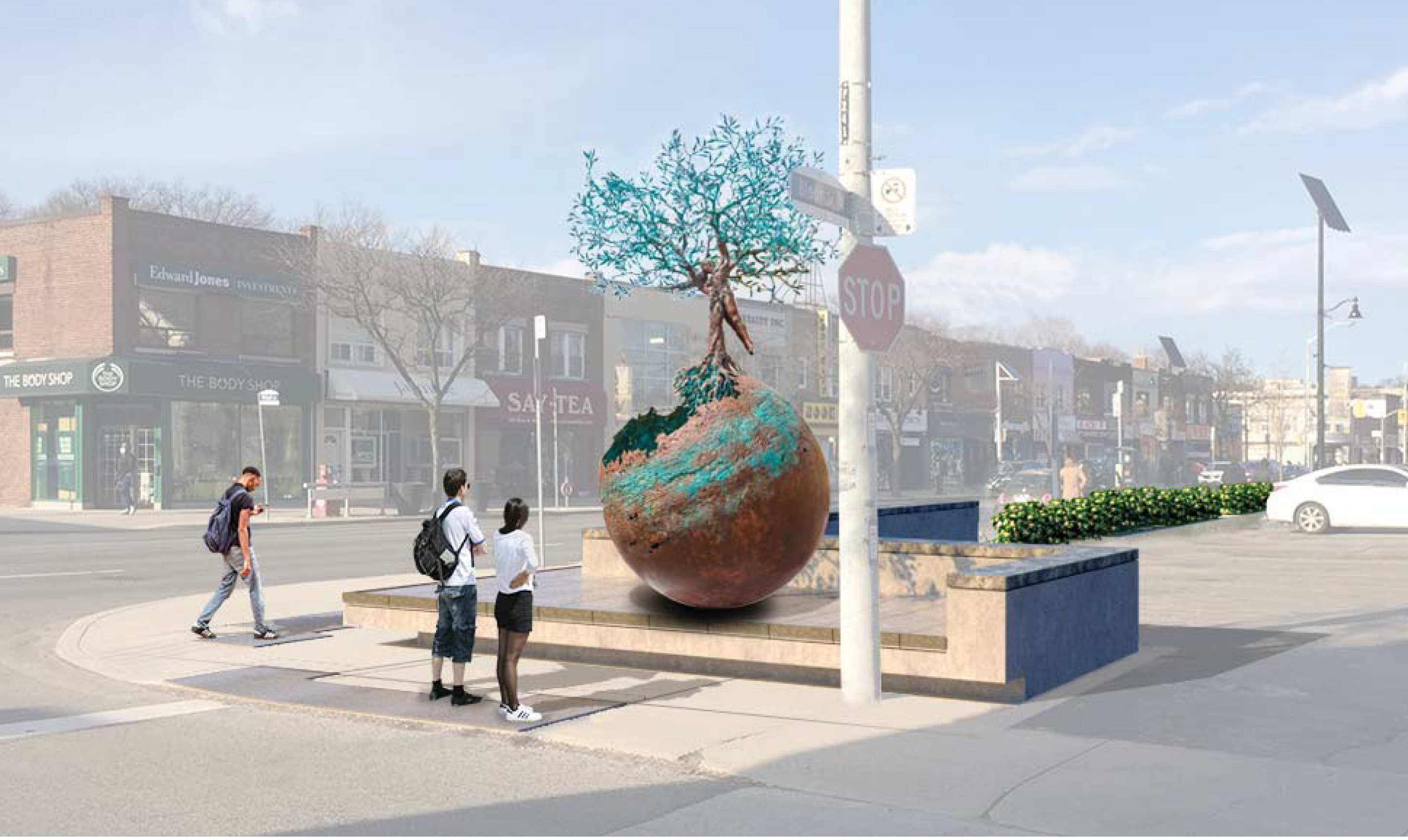 Following from our initial sculpture plinth proposal for Bloor Street, the Bloor West BIA requested that we apply the prototype to three more street locations; two sites located on the Northeast and Northwest corners of Windermere Avenue and Bloor, and another on the northwest corner of Durie Street and Bloor.

All three of these sites have shallow sidewalk widths. The Windermere Avenue sites have widths of 6 meters, while the Durie Street site has a width of 5 meters. Windermere Avenue narrows on its western edge to widen the road, consequently reducing existing sidewalk. We have eliminated this condition to retain an even and wide sidewalk width stretching to Bloor Street. Similarly, we proposed that the western sidewalk of Durie St. be extended into the road by 1 meter, attaining a common sidewalk width between the adjacent sites.

Windermere Avenue, with its two mirrored sites, presents an interesting opportunity to showcase both sides of the street, creating a visual connection toward the parks and parking lots located directly north of Bloor Street’s storefronts. Unlike our first prototype site with an empty parking lot adjacent both streets, we have to respond to the presence of retail commercial bases with residential levels above, which means that access to apartment entrances and storefronts facing onto Windermere must remain open and accessible.

Durie St. in a similar sense has access along its wider edge towards a park. The two streets have long frontages which are separated by the Bloor subway as either a park or parking lot. The depth from Bloor Street extends to over 30 meters and presents an ideal opportunity to utilize this space. Unlike the initial prototype site, attaining Bloor Street frontage is problematic given the pressure of pedestrian crosswalks and other impediments that would squander the existing healthy Bloor Street frontages which already contain an assortment of utilities and public urban street elements.

Given the space available on the three sites, the challenge is to balance safe pedestrian access with a suitable width of sidewalk and the need to create adequate space for placement of the plinth and public art; as well as responding correctly to the building face, allowing for access along its edge and the outer sidewalk. 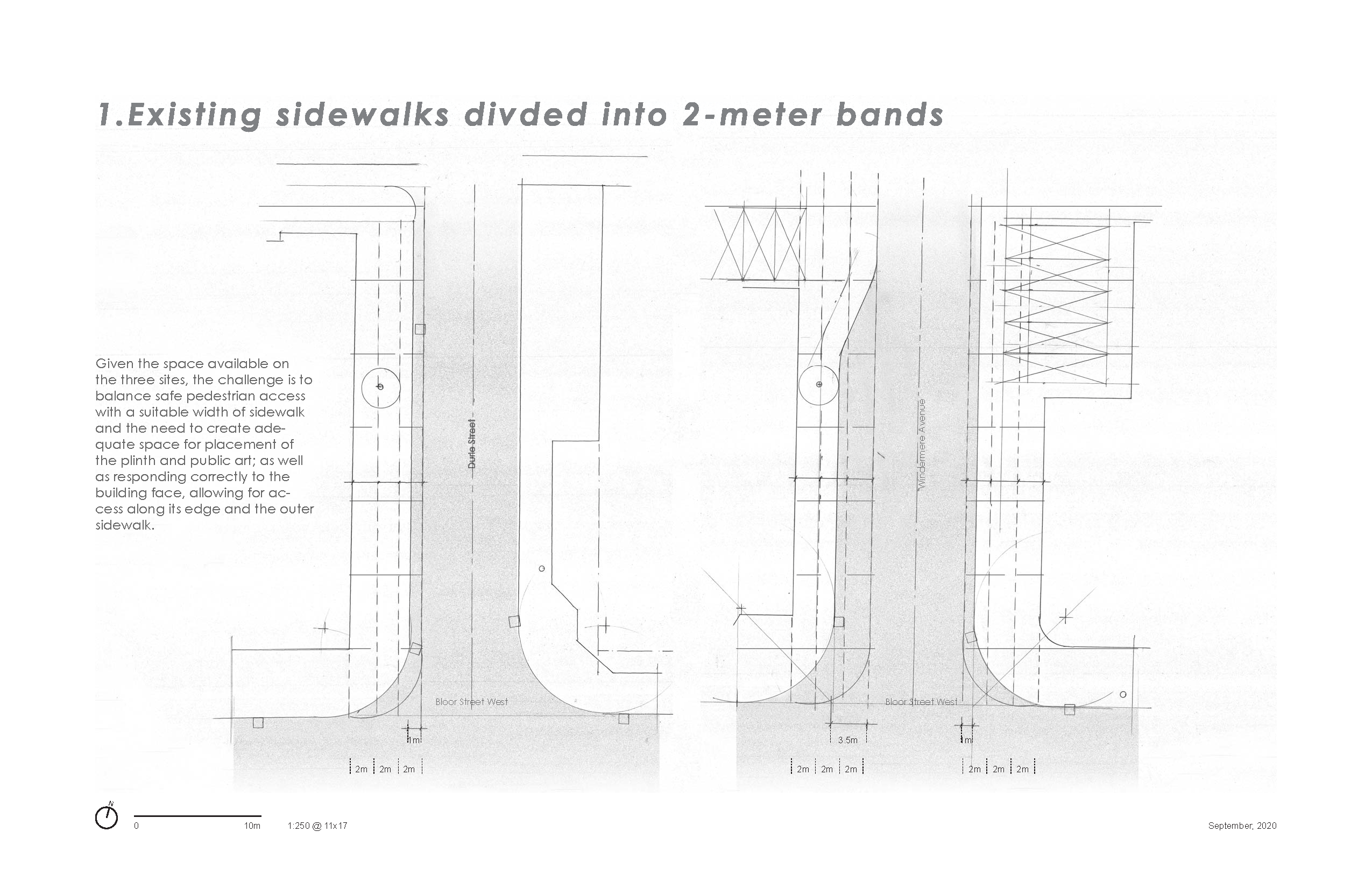 Consequently the plinth’s ideal position would be between two pedestrian access lines, allowing the site of the sculpture to float between the two areas of public circulation; and in turn creates multiple viewpoints along the length of the sidewalk for sightlines and viewing potentials for the art work as well as seating. 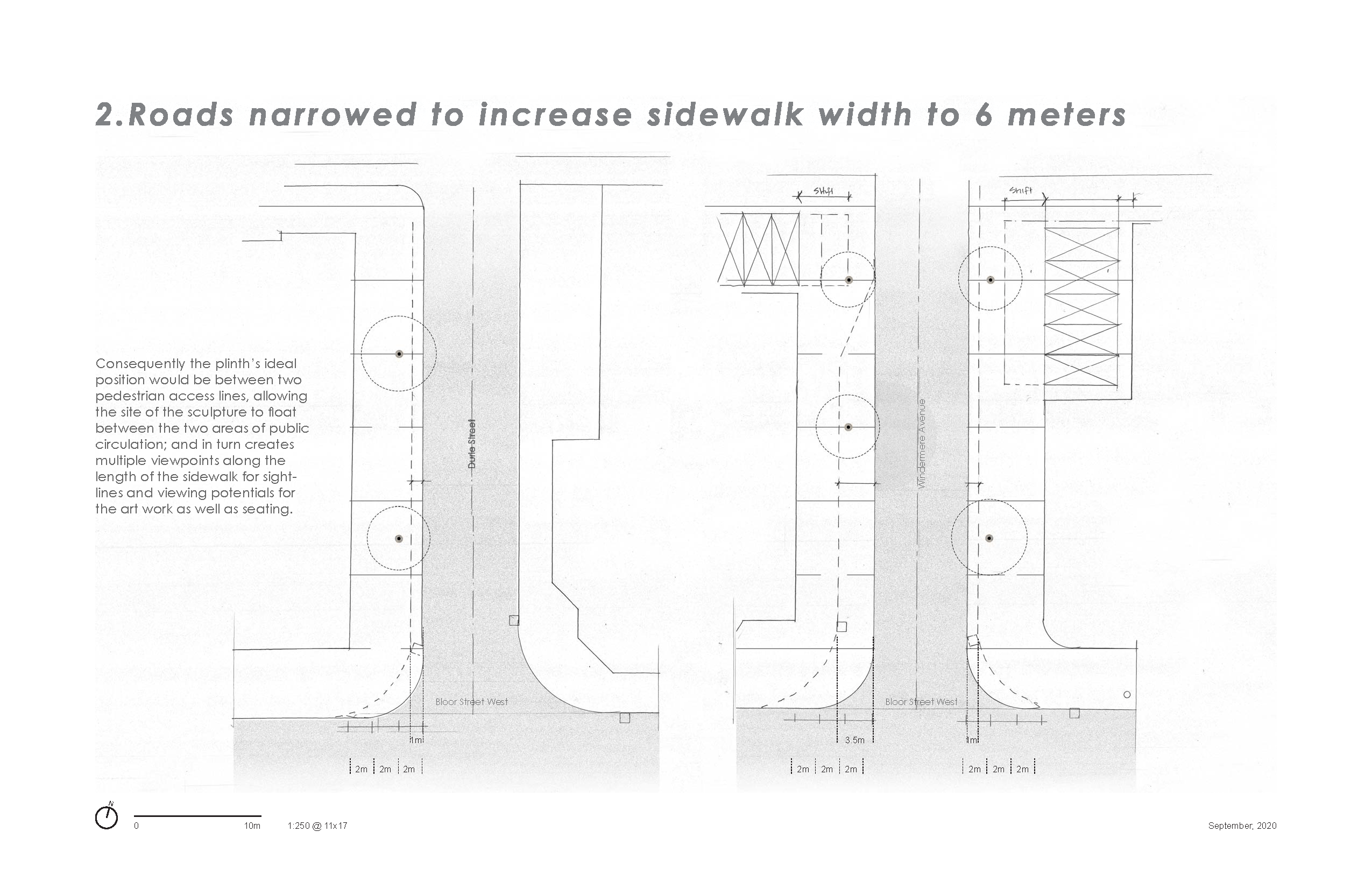 We are proposing that a catalogue of these plinth site be set up with a range of possible different configurations and combinations, from which the BIA can determine what best fits their
needs. This catalogue of plinths could be easily identified and, dimensioned, and positioned to assist in the selection of artists and artworks, or allow choice to facilitate artist’s site selection themselves. 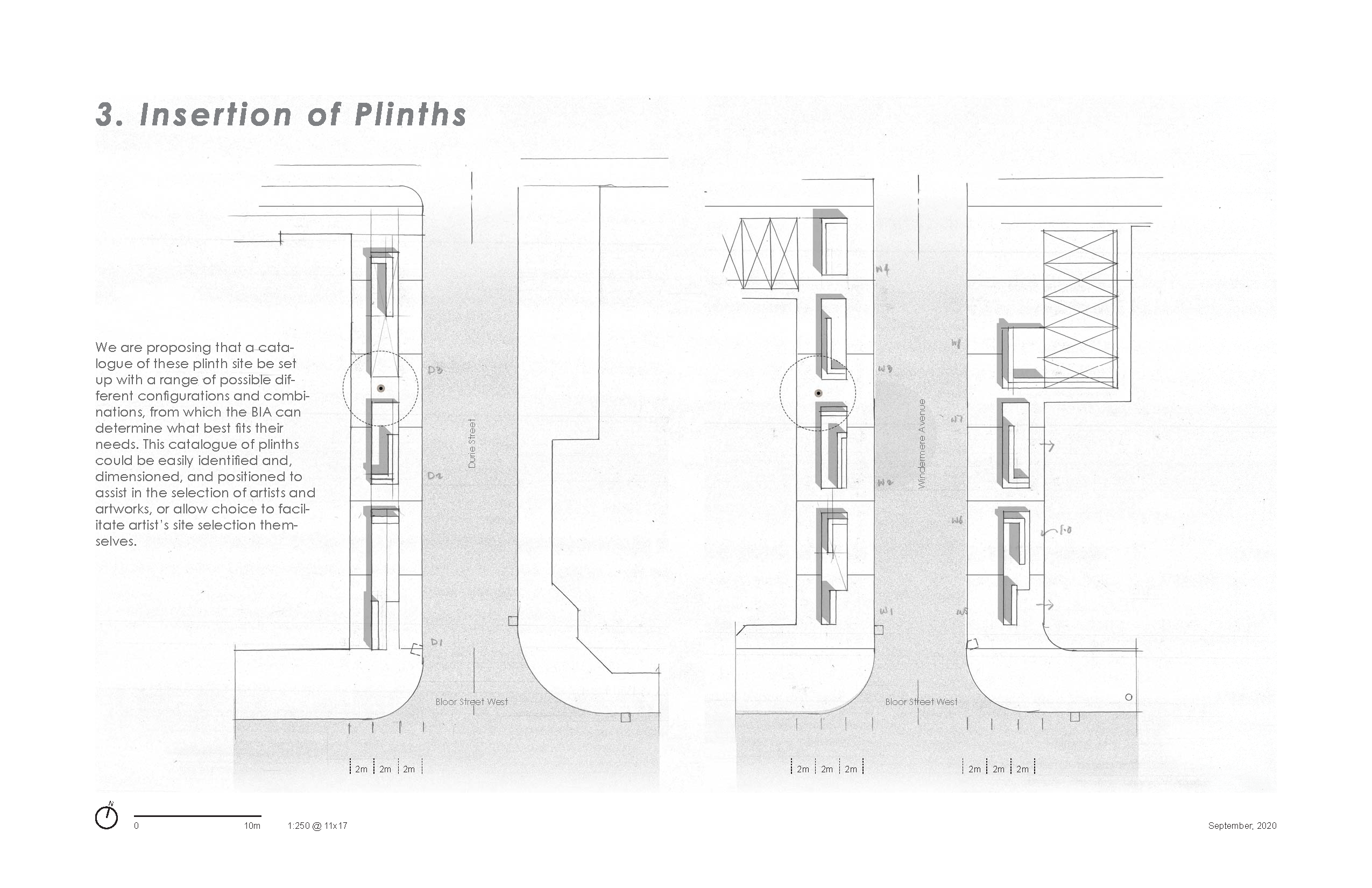 The adjacent homes, apartments, and storeowners could give potential options that best reflect their retail needs, visibility, and intensity. Allowing that each art piece is different, with different manners of presentation, the plinth needs a level of neutrality which does not sacrifice quality. 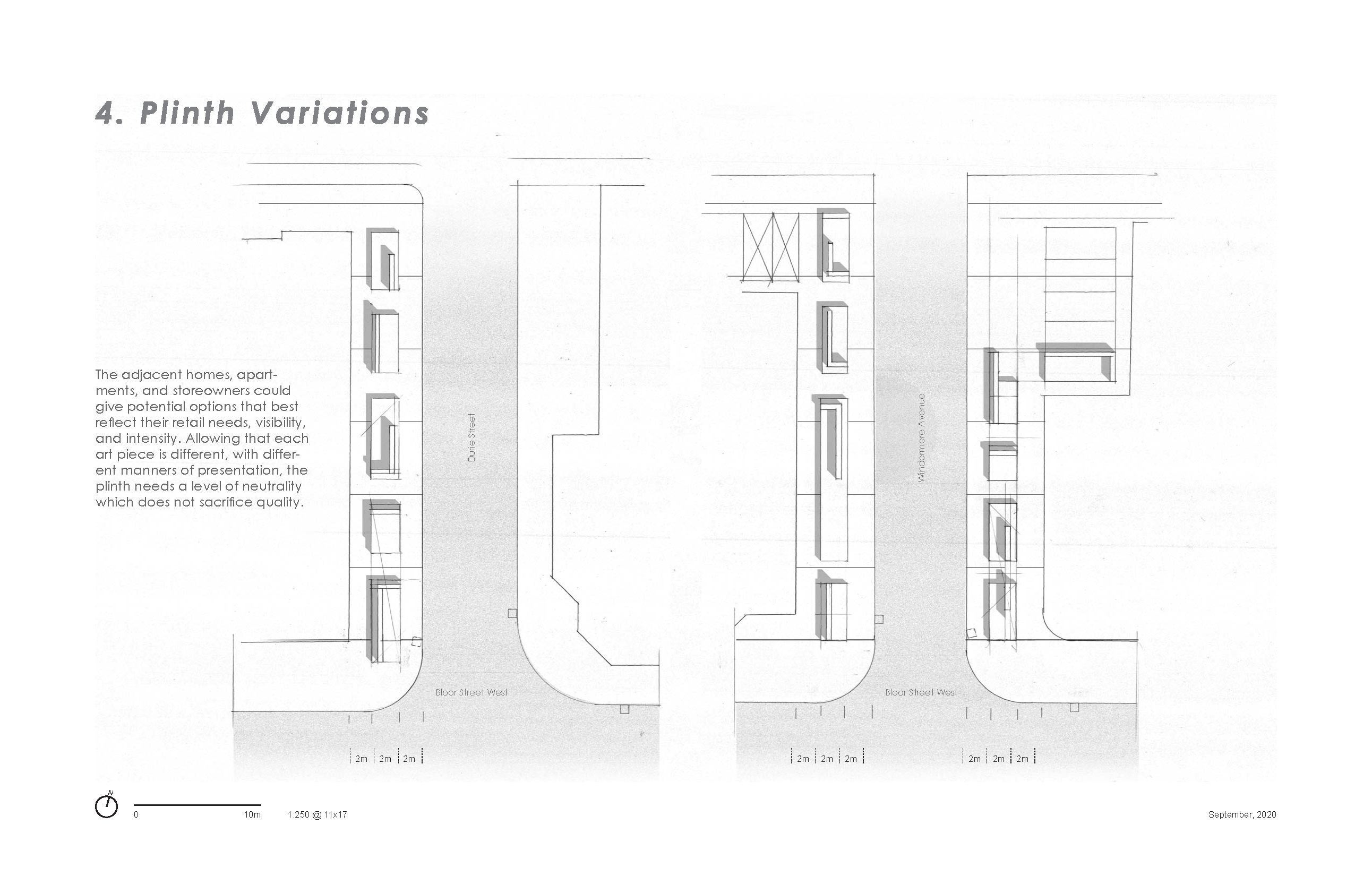 Given that the plinths can be either singular or form a series allows the BIA to determine the degree of intensities and quantity for the City and BIA, allowing for budgets to determine the number
of these plinths that can be built, allowing for discretion in the position and order of their installation. That can as well be calculated with interest generated both by the artists, the Bloor village, and the public. 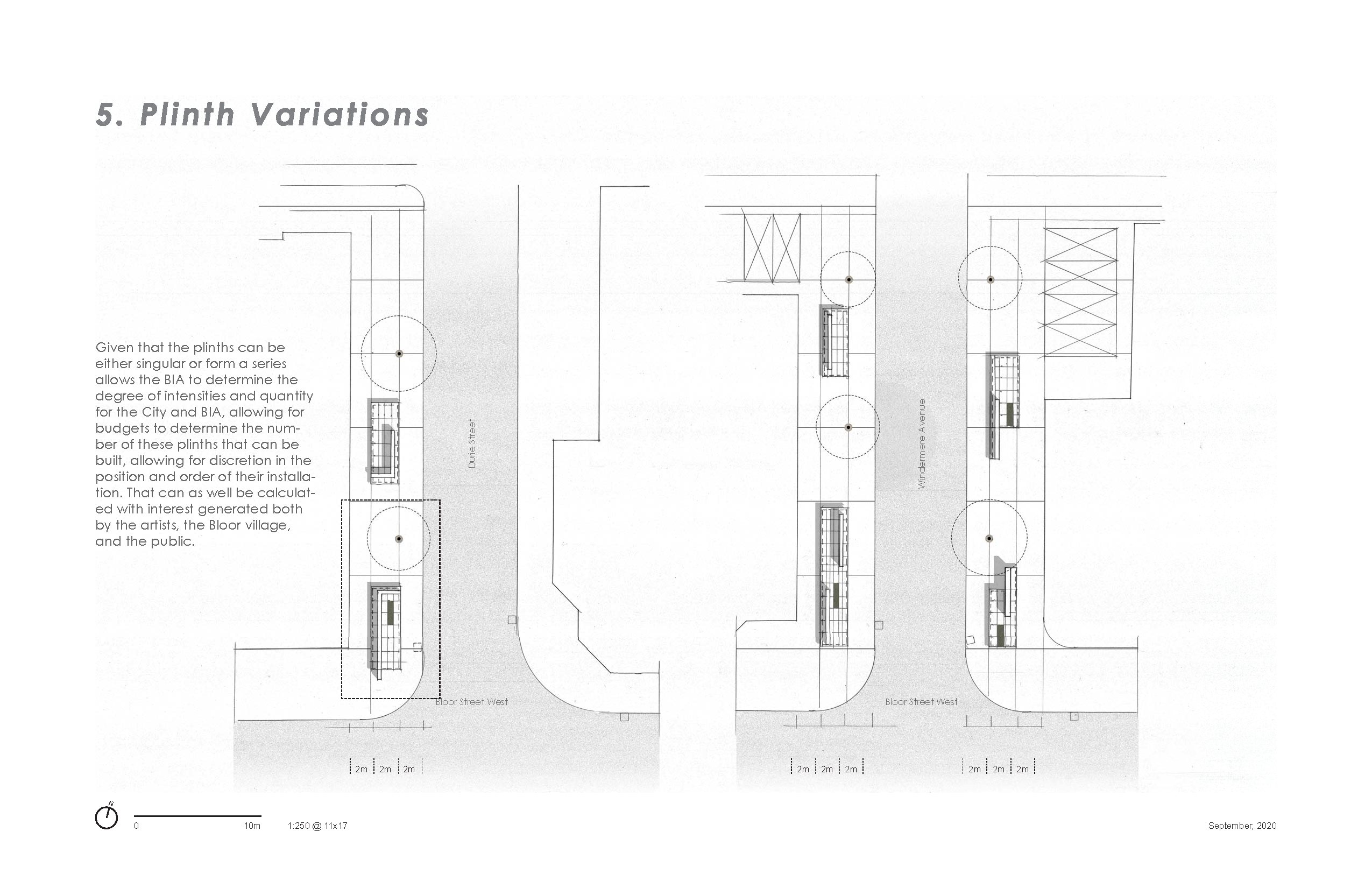 The basic plinth prototype is characterized by an h-shaped raised surface with a widened area for sculptures, seating, and small plantings along an extended edge which forms the potential profile. The general idea is to utilize this basic configuration of a plinth surface, wall, and seating in a multiplicity of different way that allow for options and choice. For instance, the extended 3-meter length of sidewalk can be constructed in a sequence of small lengths of plinths and seats, giving these sequential sites allow for more integration between pedestrian access and movement around the site, thus endorsing the artistic merits of these sites that allow for a full movement around them. Equally possible are longer strips of these plinths in a connected pattern. The low walls work with the plinths surface creating seating options that allow for multiple seating orientations alternating from side to side of the street, highlighting the placement and established points between “gaps” in the plinths. 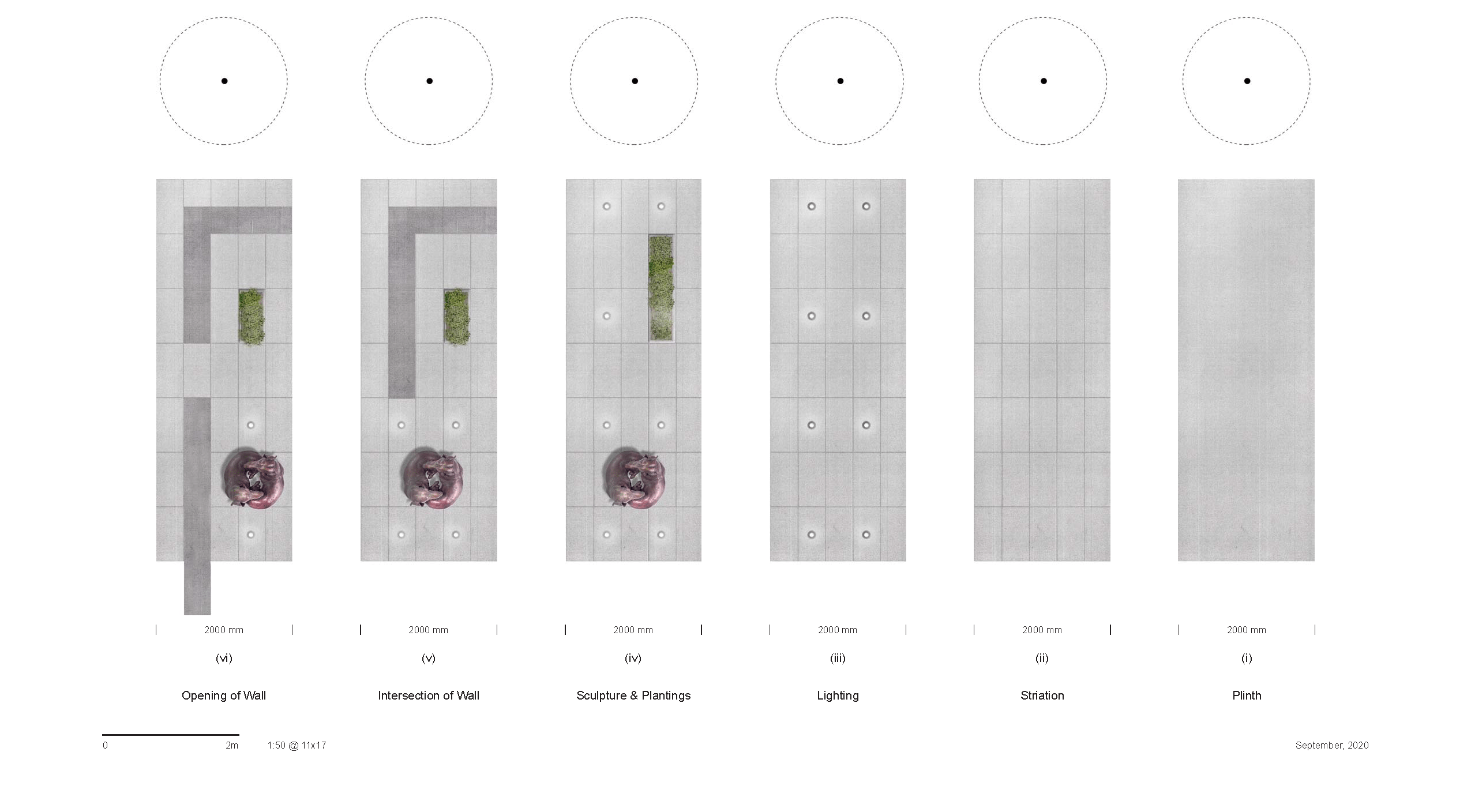 In contrast to most street BIA furniture repertoires, our proposed plinth art pieces are unique and are intended to make one distinguish the Bloor Street art installations in a unique way. The multiple raised plinth segments with a surface for art/sculpture as well as seating are made from naturalized stone placed on top of a In-Situ concrete base. The seat heights and wall segments have multiple purposes that can be utilized by the BIA for events.

For the artist and their works the plinth surface acts as a horizontal canvas for their positioning of art is the best location to exhibit their work, while the 2-meter width is restricted in its width, it nevertheless can stretch in length to match required needs. The width of the sidewalk determines the horizontal space available, because of the low plinth height and adequate stone patterning and edging which can prevent damage along this surface.

Correctly done, this surface treatment (see Dundas Square Benches) are designed for pedestrian comfort and enjoyment without appearing harsh or mean-minded in in an overly protective and institutional manner. The stone top and detailing support the site of the sculpture in a robust manner, creating a floating effect. The single plinth’s position above the sidewalk surface make it distinct from the sidewalk, which could also be decorated with a patterned surface which can visually link an archipelago of sites along Bloor Street set apart, raised up, and easily accessible.

Locations for other repetitive elements such as garbage cans and lighting can be located such as not to deter these sites, but provide adjacent access for plastics, coffee cups, etc. which inevitably collect. The stone surfaces have a variety of finishes from a honed, flamed, or water jet-cut finish, with sealed surfaces to prevent and minimize stain, with sealed granite surfaces which does not age or discolour, offering the archipelago a series of plinths different colours and textures. 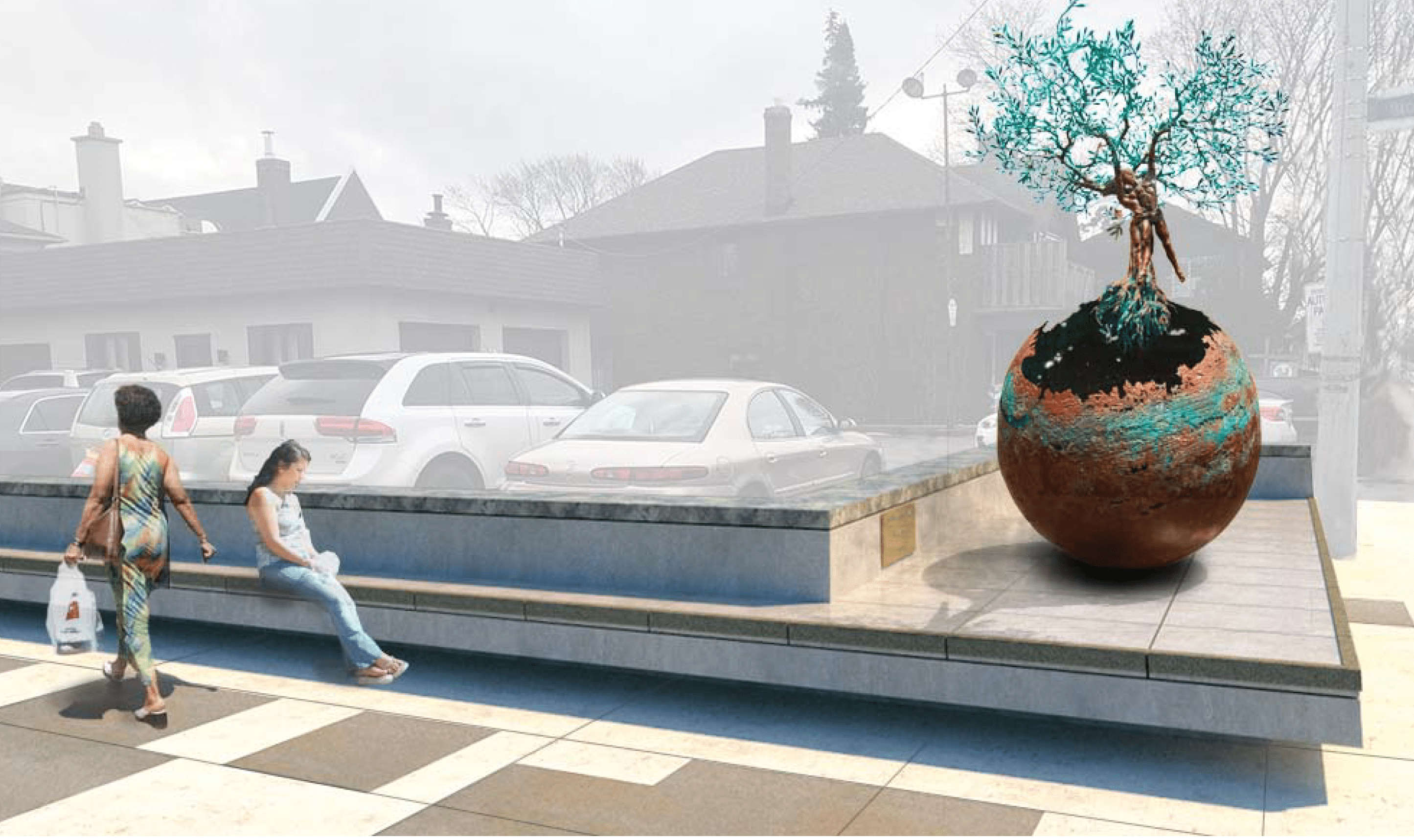