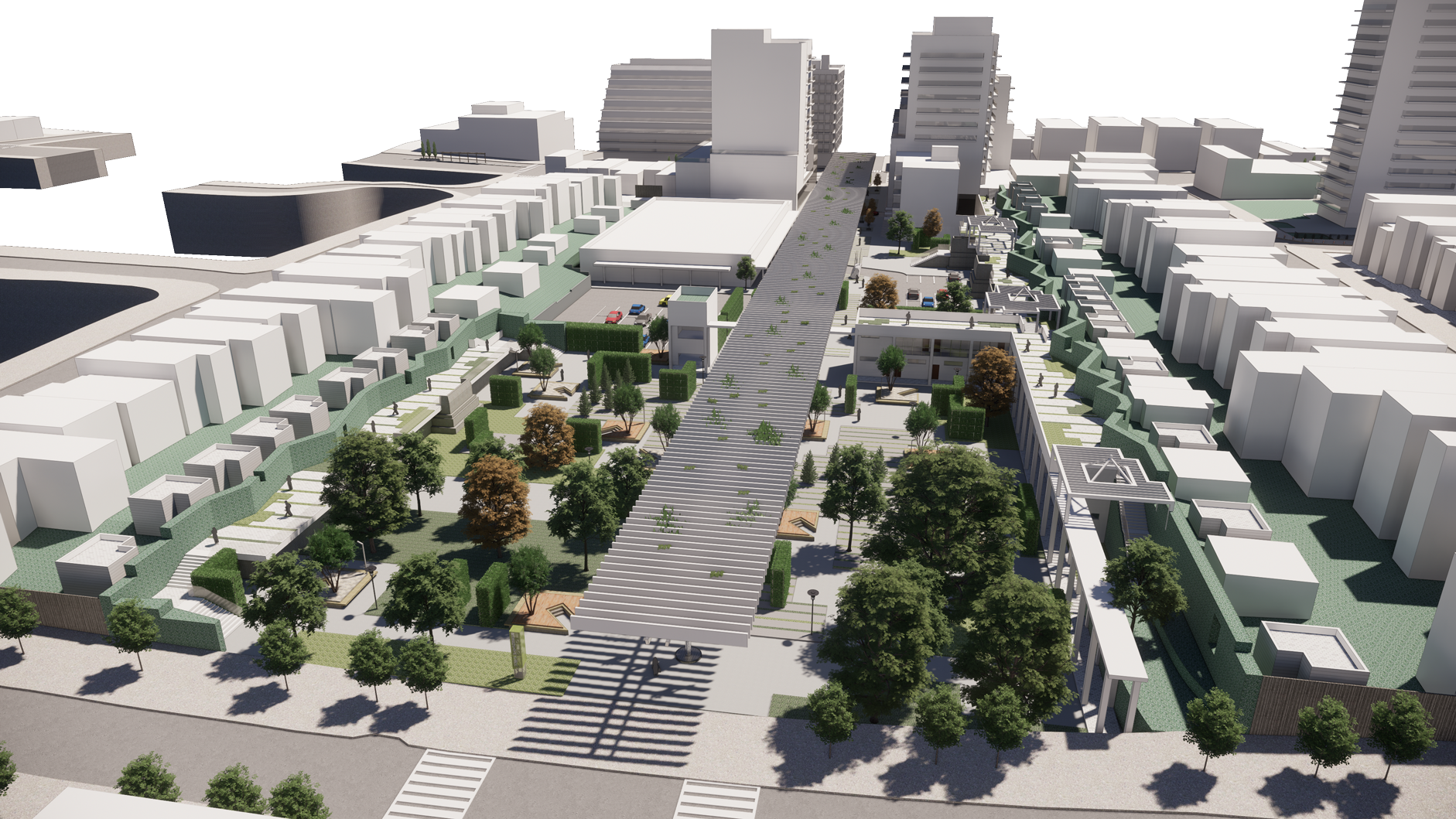 Brown and Storey Architects perform many different types of architectural and urban design initiatives in which there are no client or commission; we work with a range of community groups and organizations that enable us to create solutions aimed at community needs. As part of the City of Toronto’s Oakwood-St. Clair Parkland Study, several community organizations identified Roseneath Park as a site for potential improvement, including:

The parking lot consumes the once present Alberta Ave right of way, in favour of an access road serving No Frills and access to the dispersed parking lot. The parking lot on its east and west edges extends parking spaces to an engineered wall and upper sloped landscape, the former creek’s historical banks. This “abandoned” space is undeclared and currently forms a screen to the adjacent residential backyards. Similarly, the parking lot’s northern boundary to the park is abrupt and unarticulated. In winter, a snow storage boundary confronts the park. The parking lot itself is treeless and exposed to weather extremities.

Access through the parking lot from St. Clair Ave is unmarked as a pedestrian space. Eventually, it extends into the existing Roseneath Park, effectively dividing the park into two sides. The expansive scale of the parking lot overwhelms the site with excessive asphalt. It also separates Roseneath Park in a highly conflicting way, making the southern edge of the park more of a barrier and boundary between itself and the parking lot. This same condition occurs at the park’s east and west ends, where the former slopes reduce the park’s organization to unusable edges lacking function and activity.

Two new condominiums are being built at the parallel corner location of Alberta Ave and St. Clair Ave. While the condos benefit from the partial street that is between them for access to their underground parking garages, they do not contribute spatially to a larger idea of the site. An improved new spatial matrix that includes the park expansion would complement and complete the condominium’s locational authority.

These new residential neighbours also suggest a need to accommodate more open green space and public amenities. The potential for expanding Roseneath Park from its current size of approximately 2400m2 to double its size, 4800m2, would greatly strengthen the park’s position and attractiveness as a destination park serving the larger St. Clair precinct.

With the new proposed twin condos on either corner of Alberta Ave, the question becomes, what improvements does the street gain with these new developments? Currently, the street is serving No Frills with parks on both sides of it by the way the street vanishes into a swath of asphalt, extended north, only stopping at the start or boundary of Roseneath park with a ramp.

The street does not support pedestrian use or distinguish between vehicular and pedestrian spaces. Although the new condos feature sidewalks and access to the underground parking, the street is not continuous; it doesn’t go through the park, but does have alignment to its extension north of Glenhurst Ave. The real possibility has to do with how the space of the right of way and how it is organized.

With the expanded capacity and new area of Roseneath Park, there is the opportunity to create a new park pavilion and public washroom amenities. The site and positioning of the park pavilion occupies two sides of the expanded park; the L-shaped pavilion forms a western edge of the site and ties into the raised terrace. Its two-storey height also forms an inside frontage on the park’s most southern boundary.

This structure frames the space of the park and sets up a relational boundary that negotiates with both the new reduced space of the No Frills parking lot and the inside of the Roseneath Park proper. The pavilion makes a proper frontage to the park, correcting the backyards that currently face it. The pavilion front loggia is an open columned, two-storey space that creates a public threshold between itself and the park.

The pavilion becomes an amenity that organizes new potentials within the park’s new matrix of spaces. These spaces include public washrooms, supporting attendant space for fulltime maintenance of the washroom, staff offices, health and fitness areas, gardens, and recreational areas, including water play. These spaces also hold open the opportunity for other social uses that could evolve over time in response to community needs.

In addition to these amenities, the pavilion maintains a level of overview and security while maintaining an openness. From a point of view of weather and climate, it provides a safe and protected walkway. The loggia and its open spaces can also work as a place where the entire park can retreat to in rainy situations or other weather extremities.

While the pavilion is located with the park, it also serves a larger role and service need for the greater neighbourhood, including the shoppers and commercial spaces along St. Clair Ave. As a destination park, the Roseneath Park Pavilion provides the necessary physical and functional support to ensure a well-integrated, co-evolving, and transformational new institution.

The pergola’s scale and dimension intentionally exceed any limit tuned to human dimensions; the pergola takes on a metropolitan scale that is reflective of a need to establish a large organizational order over the site. The scale of the pergola that stretches between St. Clair and Glenhurst Ave is one that takes the entire available distance and scale into its structural formation; it is more suited to the soon-to-arrive corner condominiums on Alberta and St. Clair corners.

The pergola constitutes a reciprocal arrangement that improves the paired condominium’s publicness; the pergola links the two separate buildings together with a shared public amenity to what would otherwise have been a discontinuous service road with no public space values. Now the condominium buildings share a linear park, a public new identity structure, and connection to a park that was once obstructed by vehicle access and an asphalt sea of parking spaces.

The pergola is simultaneously an open and solid structure, having equal amounts of space and solid in a repetitive pattern that interacts with light, casting shadows, and blurring the structure’s boundaries. Its elevated role above grade creates both a ceiling and a non-ceiling effect, open to views in all directions under its canopy.

The right of way as an open landscape between two building edges is here re-thought as a structure and apparatus within the right of way. The pergola is not just a neutral mediator between two built sides, but rather, a significant infrastructure instrument that re-states the street and exceeds its normative vocabularies and protocols. This new shade pergola’s phenomenal role as technical instrument intensifies both the nature of the street and the park simultaneously, with minimal points of focus and solidity that asserts the Roseneath Park as a city destination.