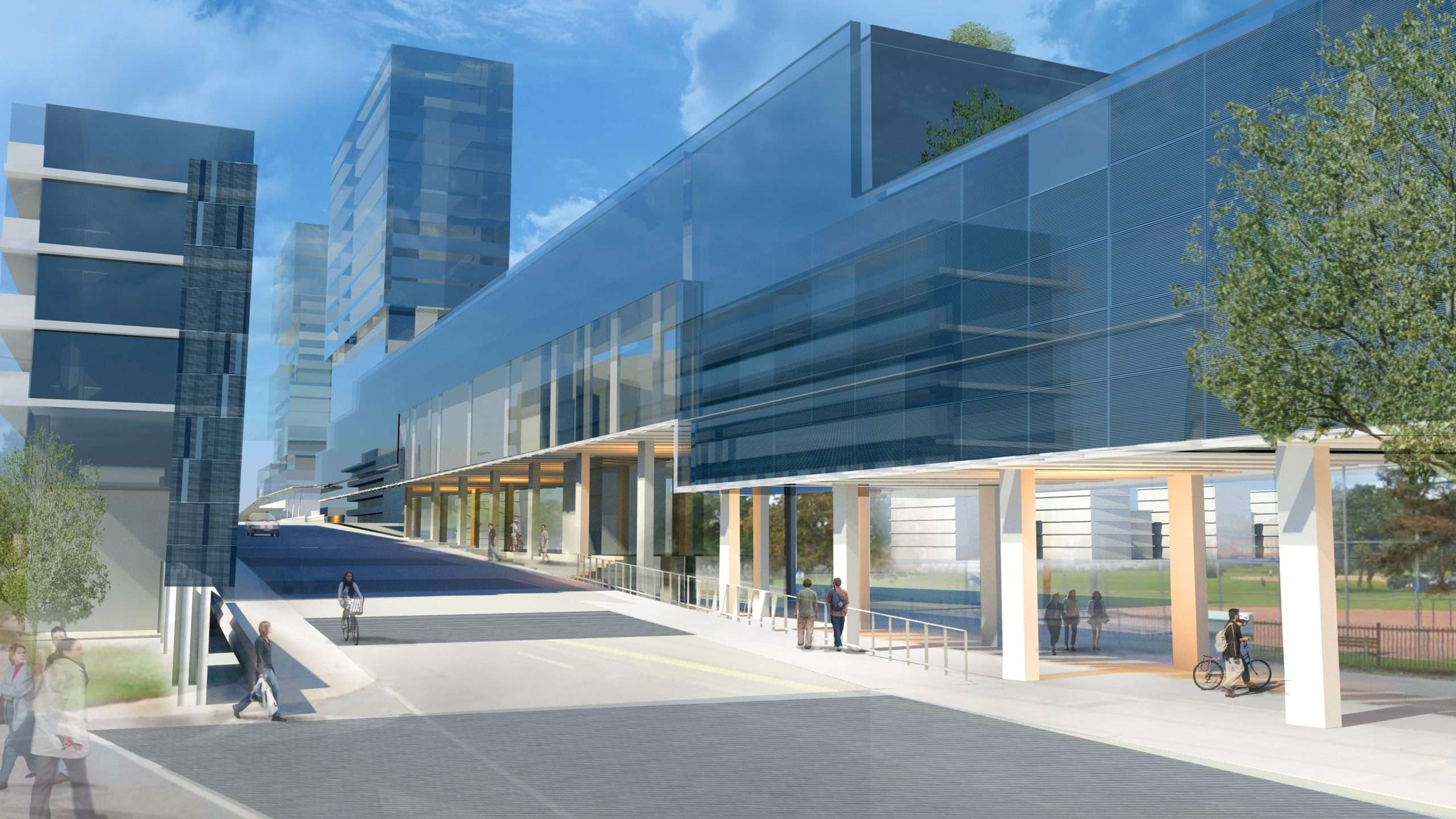 The possibilities of Main Square is a beginning point for the Danforth community to look at a broader set of linkages and a constellation of elements – local retail, employment, housing, transit / mobility connections, parks access, reactivation of public spaces, bridging blockades – to reimagine and reactivate Danforth and Main as a major hub of the City. Brown +Storey Architects Inc., working with several members of the community, have started a plan of possibilities that can contribute to a larger conversation about city-building and transformations, going beyond the surface to bring local designers, visionaries and activists together to begin to examine a bigger picture.

Problem 1: Residential towers isolates residents from the street and new proposed developments will fill up the space occupied by Main Square.

Idea: Redistribute a new housing mid-rise form that provides the same area but preserves the Square and re-activates street edges around the perimeter of the site. Add a new perimeter park around the edge of the entire site.

Idea 2: Reactive the Square: make a strong new public space that connects to the full Main and Danforth intersection. Make new retail at its edges tying into a perimeter park. Make a strong north-south edge that becomes part of a new covered passage between the TTC and GO stations. Make a new stair and elevator second exit connecting to the TTC. 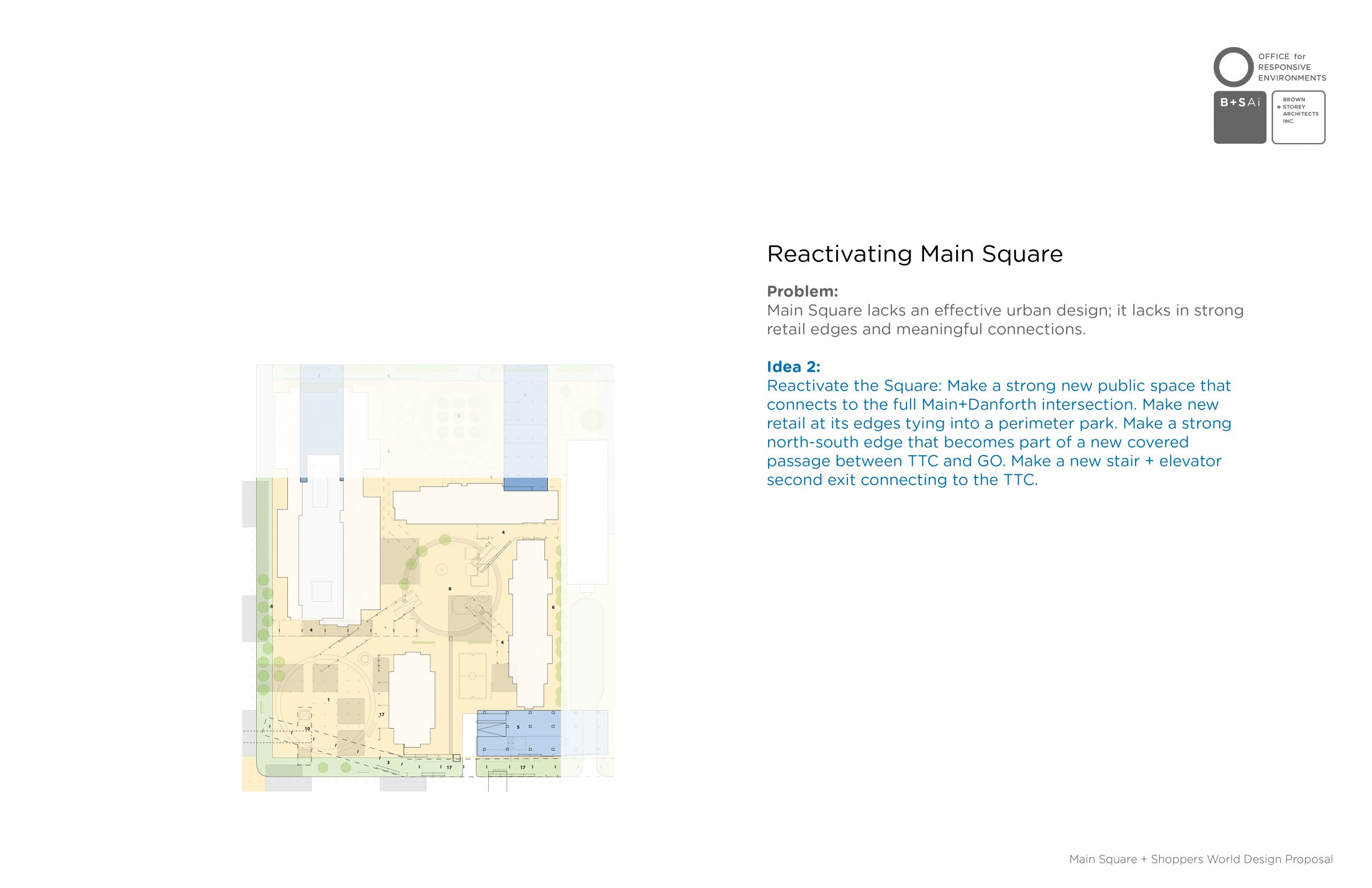 Problem: The connection between the GO Station and the TTC Subway Station is unprotected, unpleasant and unrecognizable.

Idea 3: Make a new perimeter canopy that provide a covered passage along Main Street connected GO and TTC. The passage can support pop-up retail and form a strong edge to Main Square and be integrated with a new second subway entrance in the square. 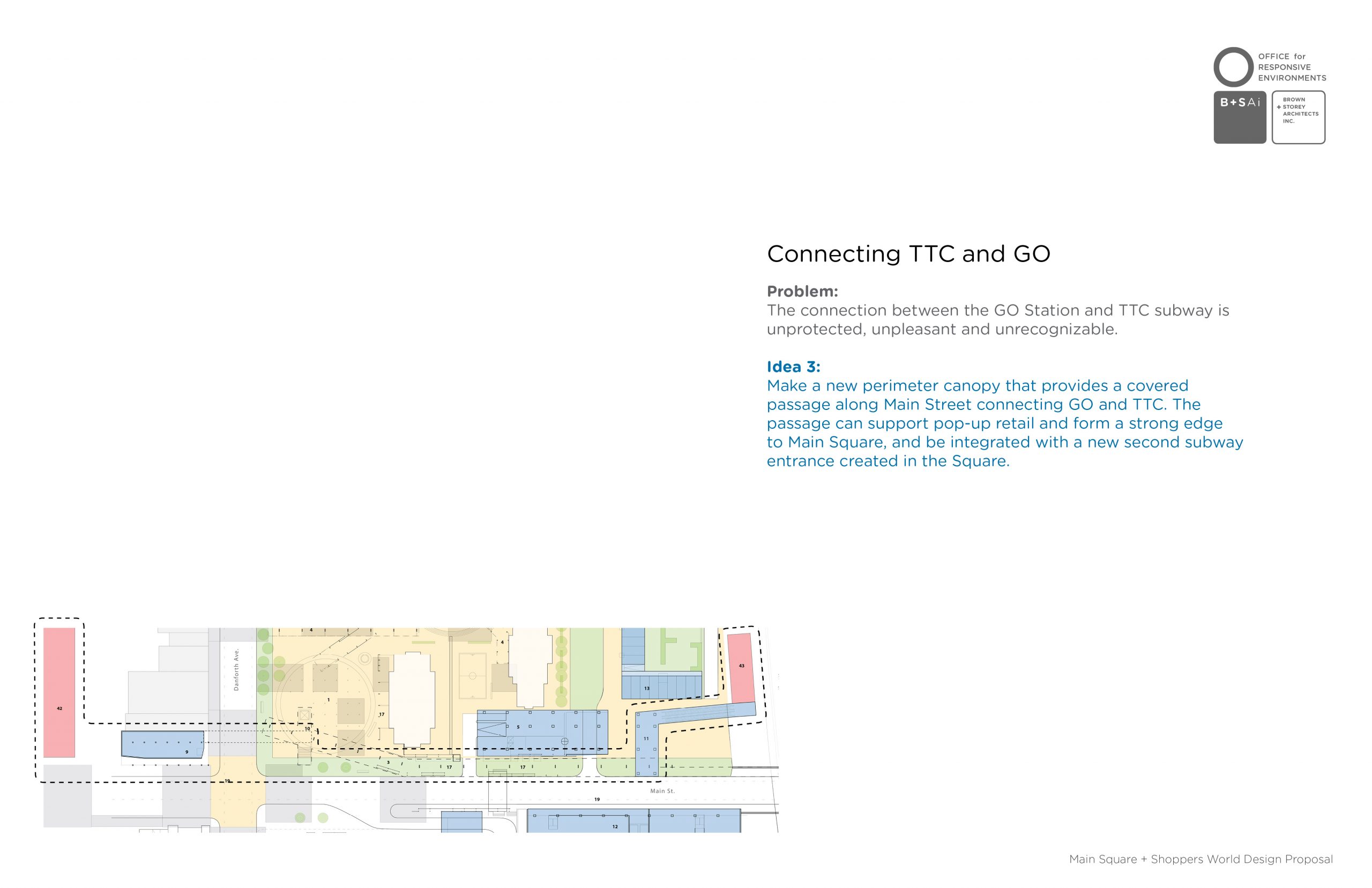 Problem: Main Square block is isolated from the street frontage. To the south, Ted Reeves Arena and East Toronto Athletic Fields is mostly surrounded with a chain link fence and limited entrances.

Idea 4: Make linear perimeter parks- triple rows of trees encircling all of Main Square, connecting the housing to its context. Make another linear park around the recreational fields to the south (first remove the fence) and make a passive use park that can co-exist with athletic fields while making a new public “welcome.” 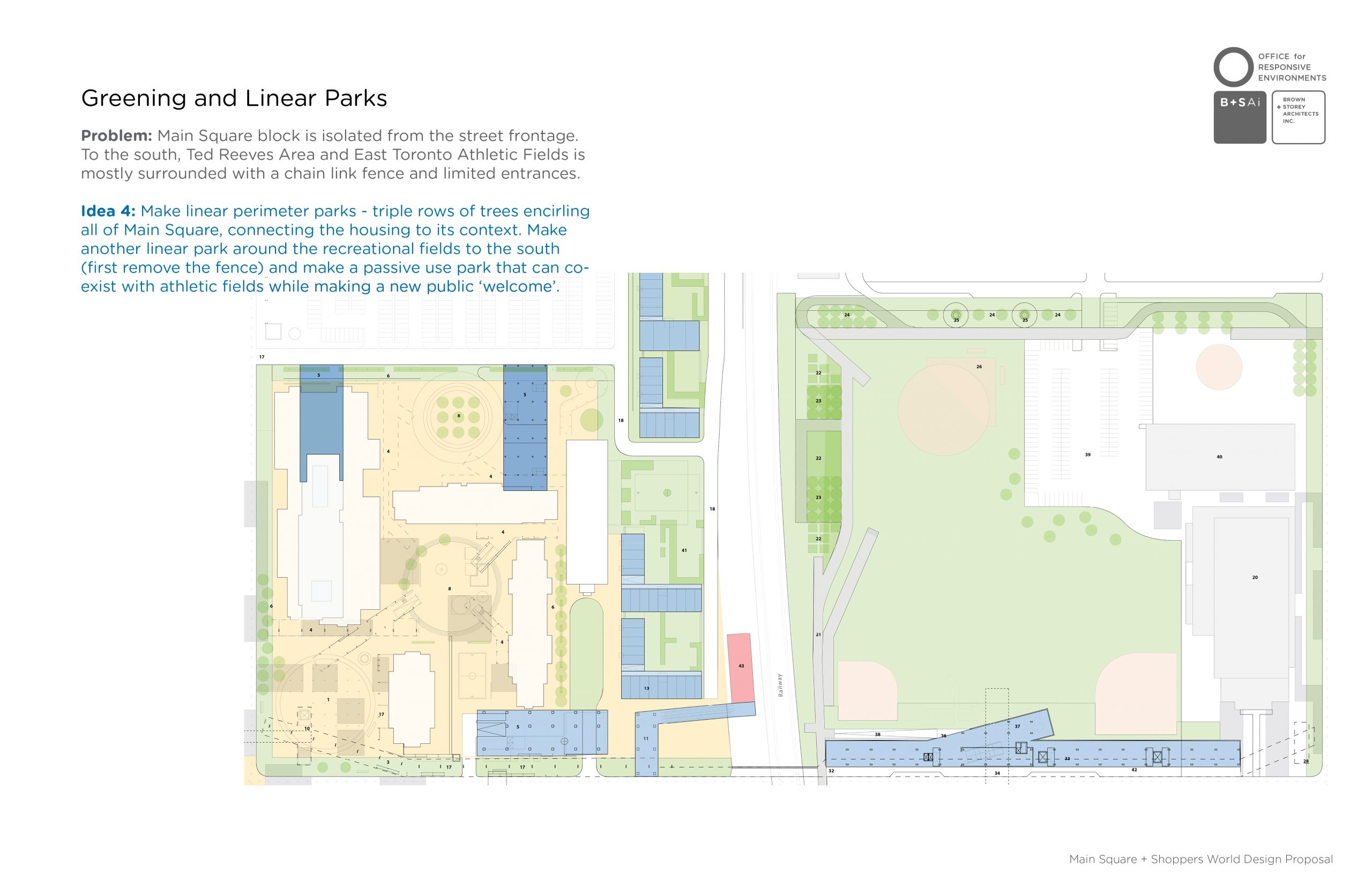 Problem: The Community Centre is isolated from the street and the community and faces an inhospitable stretch of storage bins.

Idea 6: Redevelop this zone by making a new east-west street with an eastern connection roundabout for a Dawes Road GO Station dropoff. Create a new series of courtyard housing types that frame the Community Centre. 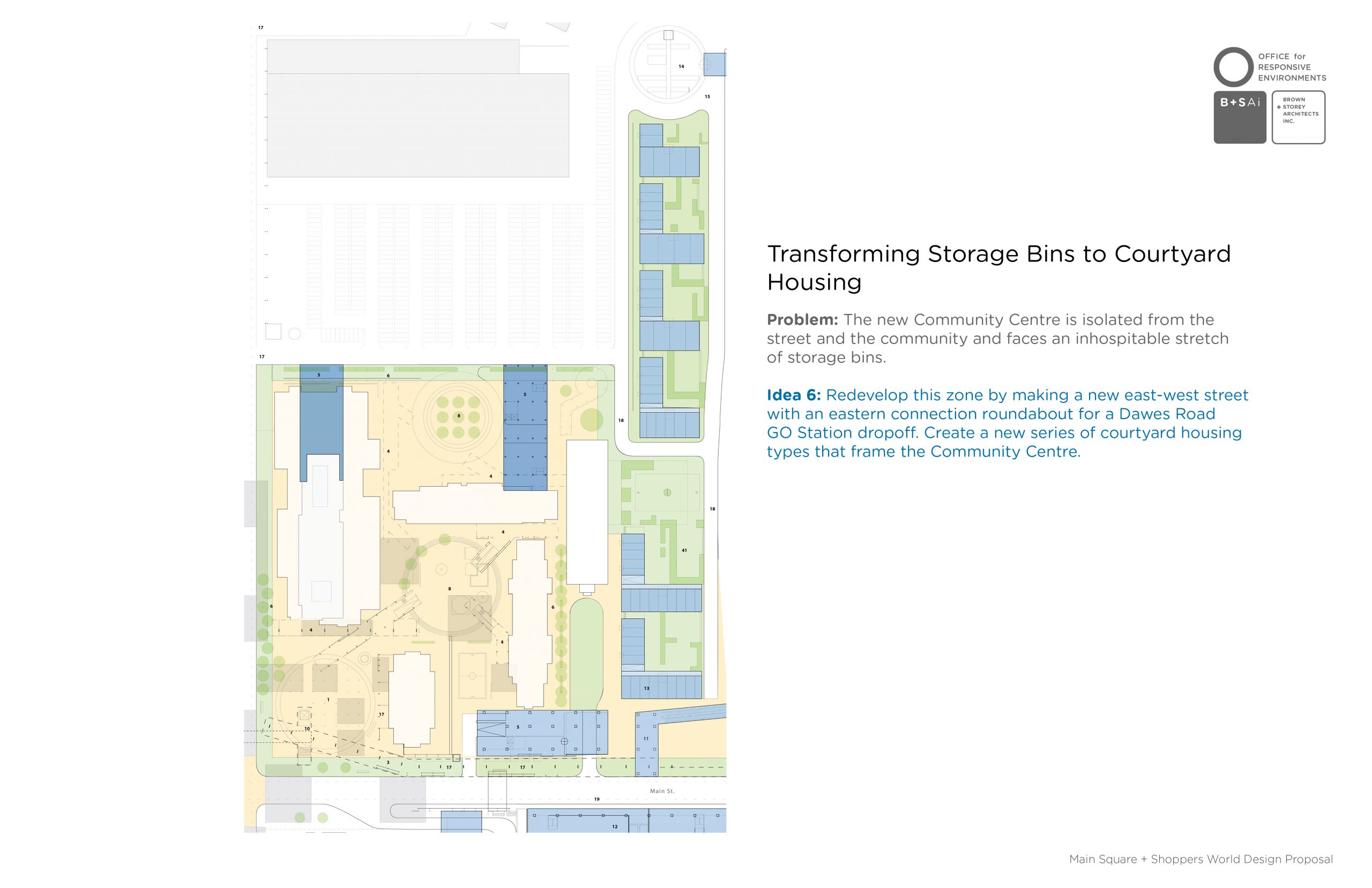 Problem: the north and south approaches to the Main Street bridge provides an unpleasant condition, cuts off access to the Park from surrounding neighbourhoods and further disconnects east-west linkages. Edge conditions are unfriendly and unsafe.

Idea 7: Re-imagine the bridge as a living multi-use bridge: extend the Main Street canopy onto new edges to the bridge, making a new occupied architectural form for small retail, housing and craft spaces- giving frontage and accessible entrances to the park and making a new retail edge to the street. Generous passages at grade below the bridge run east-west to connect parks and communities. 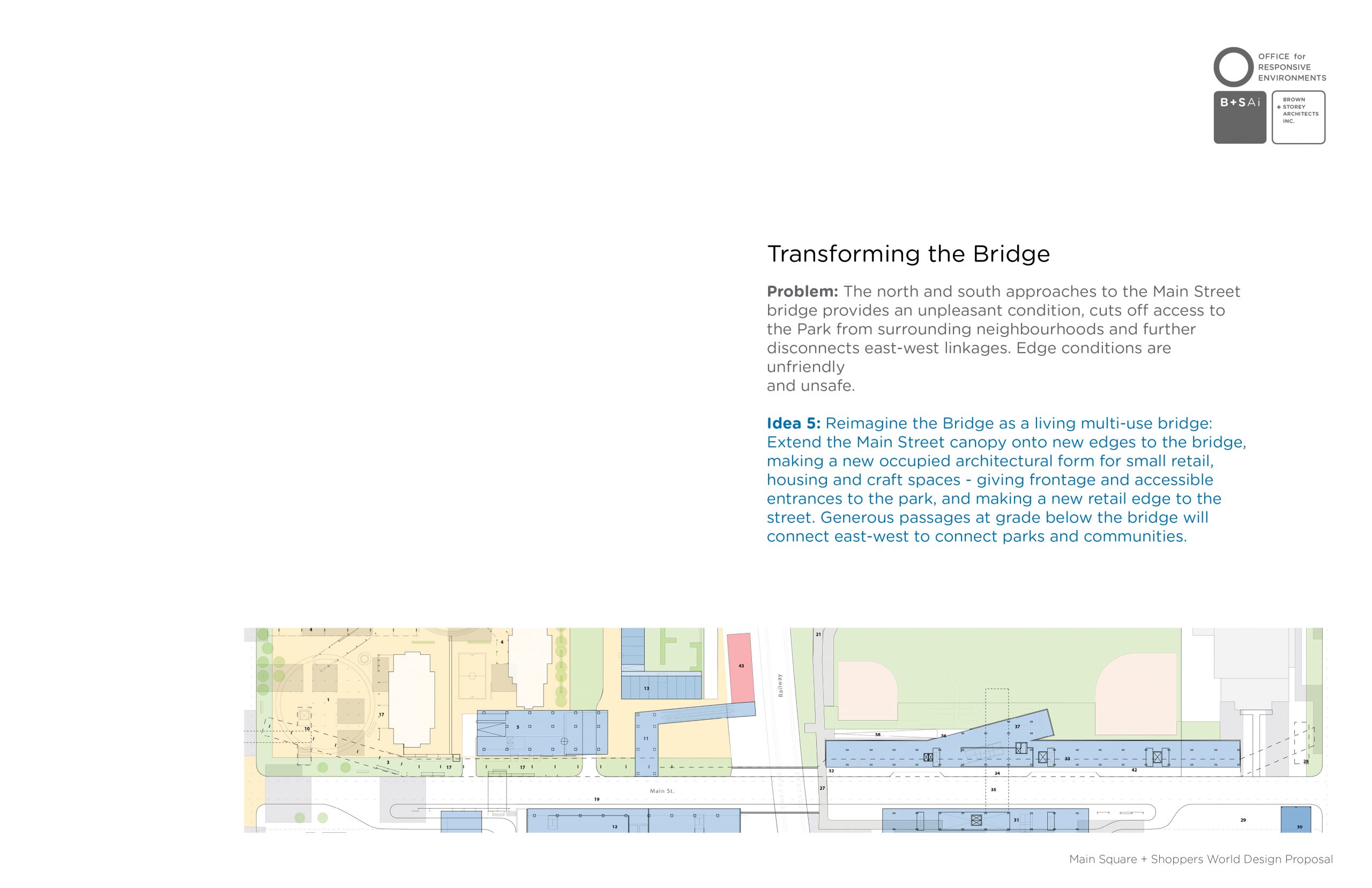 Views of the Main Square Proposal

Possible development on the suburban scaled mall site can create a more traditional urban scale in terms of its block sizes, and in built form that establishes a balance between density, height and meaningful public spaces. The new block structure can relate to the existing neighbouring blocks and accommodate a courtyard mixed use type, where buildings of various heights define both the streets and the open space within, and can achieve a reasonable amount of density for a good supply of new housing and retail that provides a similar rhythm of storefronts along the Danforth.

Victoria Park and Main is an important threshold between the former borough of East York and the old City of Toronto, the two sides of the Danforth have been disconnected by the differences between the wall of the shopping mall on the north and traditional main street buildings on the south. As the built form is re-imagined, so can the nature of the street as threshold. Narrowing of the pavement for cars can bring significant ‘greening’ of the Danforth with new bike lanes. Changing the nature of the street can be a catalyst for ‘on the street’ retail and cafes, complementing the present vitality of the south side, and treating the Danforth as an important public space and avenue.

The Danforth as Threshold

How the city fills in large vacant areas can be a catalyst for the established retail on the Danforth and its surrounding neighbourhoods, bringing new life and connections to potential greenways along the railway corridor and major parks. The city’s need for new housing can be imagined so that it complements what makes this area vibrant and interesting, and transforms the public space of the Danforth. These diagrams show one way, suggesting a number of elements that can be considered: links to green networks, re-establishing a rhythm of new blocks, and tying into a new vision of how the expansive width of the Danforth can become a ‘Complete Street’ – with bike lanes, tree plantings, places to sit, and wide pedestrian sidewalks that can become outdoor markets and cafes. A carefully planned new development can bring new qualities that will enrich and underline the best of the Danforth.