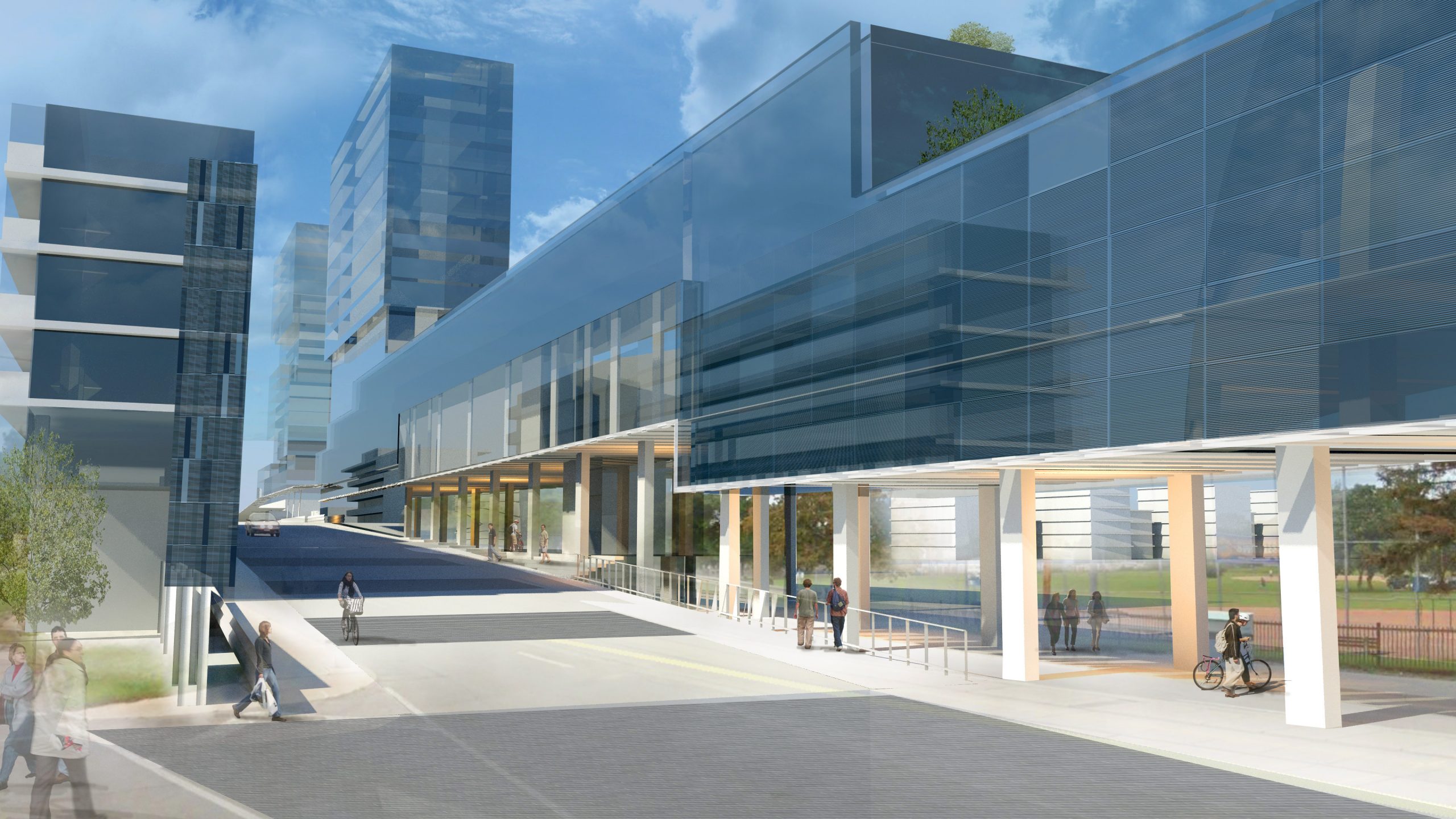 The possibilities of Main Square is a beginning point for the Danforth community to look at a broader set of linkages and a constellation of elements – local retail, employment, housing, transit / mobility connections, parks access, reactivation of public spaces, bridging blockades – to reimagine and reactivate Danforth and Main as a major hub of the City. Brown +Storey Architects Inc., working with several members of the community, have started a plan of possibilities that can contribute to a larger conversation about city-building and transformations, going beyond the surface to bring local designers, visionaries and activists together to begin to examine a bigger picture.

Possible development on the suburban scaled mall site can create a more traditional urban scale in terms of its block sizes, and in built form that establishes a balance between density, height and meaningful public spaces. The new block structure can relate to the existing neighbouring blocks and accommodate a courtyard mixed use type, where buildings of various heights define both the streets and the open space within, and can achieve a reasonable amount of density for a good supply of new housing and retail that provides a similar rhythm of storefronts along the Danforth.

Victoria Park and Main is an important threshold between the former borough of East York and the old City of Toronto, the two sides of the Danforth have been disconnected by the differences between the wall of the shopping mall on the north and traditional main street buildings on the south. As the built form is re-imagined, so can the nature of the street as threshold. Narrowing of the pavement for cars can bring significant ‘greening’ of the Danforth with new bike lanes. Changing the nature of the street can be a catalyst for ‘on the street’ retail and cafes, complementing the present vitality of the south side, and treating the Danforth as an important public space and avenue.

The Danforth as Threshold

How the city fills in large vacant areas can be a catalyst for the established retail on the Danforth and its surrounding neighbourhoods, bringing new life and connections to potential greenways along the railway corridor and major parks. The city’s need for new housing can be imagined so that it complements what makes this area vibrant and interesting, and transforms the public space of the Danforth. These diagrams show one way, suggesting a number of elements that can be considered: links to green networks, re-establishing a rhythm of new blocks, and tying into a new vision of how the expansive width of the Danforth can become a ‘Complete Street’ – with bike lanes, tree plantings, places to sit, and wide pedestrian sidewalks that can become outdoor markets and cafes. A carefully planned new development can bring new qualities that will enrich and underline the best of the Danforth.

A further interesting (non-maintenance) aspect of the contract: Astral had to ensure all moral rights in the designs were waived. I wonder if the City received such waivers before they modified Dundas Square against the designers' @BrownStorey wishes? https://www.thestar.com/news/gta/2018/03/08/architect-of-yonge-dundas-square-describes-it-as-extraordinarily-ugly.html

Keeping facades is the absolutely lowest response - as Alsop says, it’s’urban taxidermy’. No reason why housing can’t have excellent design. Losing the setback requirement provides more area for the envelope and gives latitude to bring quality to the public realm.

@BrownStorey We need liveable spaces that are "anywhere", they are a particular place. We can do so much.

But dont impose things like keeping the facade, or even affordability, in the name of preservation, because it works against todays needs.

The Greenwich Mohawk brownfield site is a 50-acre

On the corner of Main Street and #Danforth is #Mai