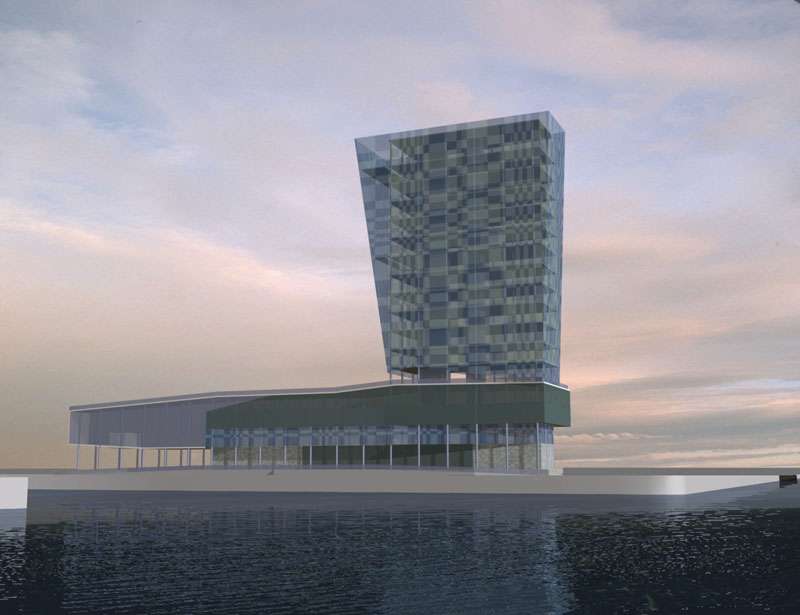 The Landmark on the Liffey must show a robust constructability. The new podium and tower must create a landscape for making a living – to be an organism that draws in and enables its constituent parts and inhabitants to be both producers and consumers of the city. The Landmark Tower must be that part of an evolving city terrain that provokes a new relationship in an old / new precinct and becomes that “bursting point” and cusp of Dublin, confronting and engaging the world as new ambassador.

Worldliness / Objectlessness : The instrument of the double skin constructs a visual accessibility of the tower at three moments:

The distant reception to close range view does not resolve the figure but deepens it – a landmark as imminent and emergent entity, a simultaneous state of objectness and matterlessness. The cycle of approach is mirrored by a cycle of departure from within – the view back to the city and to the Liffey, tempered by the double skin and by the direction of the user.

An ability of the inhabitant to become a co-evolving participant in a self-organizing system; The building drawing in the creative producer into non-programmed event space [the public jam session club – non-professionals come together to jam] The flex-space made by the upward / outward splay of the tower form and open space made at the tail-piece and open podium roof garden pavilion and space for transformation of uses and producers – a creative landscape for making a living.

The operation of the double skin is mirrored in the interweaving of inner and outer spaces. The terraces of the podium overtake the context, blurring the line between public quay and public podium. The horizontality of the podium roof garden confronts the verticality of the tower with views upward and through . The erosion of the inner form of the tower by garden terraces blurs the inside and outside division.

A counterpoint of discreet approaches and routes “under the skin” of the tower to the “bottomless top” and maximum flexspace at splayed tower form. The U2 presence is a centreboard for the building constructability, the landmark within the landmark.