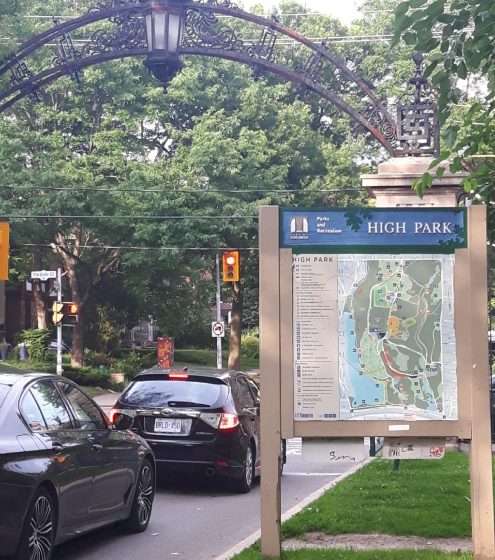 Parkside Drive is rightfully the subject of serious neighbourhood concern. With its asymmetrical relationship to its two sides, Parkside Drive is highly divisive, and with its high-speed traffic, there is no safe public realm. Parkside Drive still has qualities that reflect the residential nature of the neighbourhood, but whatever greatness Parkside Drive might have had originally has suffered from its widening to four lanes of heavy traffic. It is our contention that Parkside Drive must be fundamentally redesigned from its southern starting point at Lakeshore Boulevard to its transportation node at Keele Subway Station and beyond.

Where Parkside Drive encounters Bloor Street, it becomes indistinguishable, lost in a sea of asphalt. The four corners of the Parkside and Bloor intersection fail to constitute anything remotely like an urban street intersection. Except for the south-west corner, where High Park begins, the corner locations at this intersection lack an urban identity. This intersection is currently underbuilt, but has potential to be transformed into a significant gateway location with greater density.

A new corner public space could be imagined here: the three urban corners at this intersection could be the site of new buildings that fill in the gaps as well as build over the existing subway station:

The current low level of urban design is certainly to do with the four lanes of traffic that dominate the Drive, resulting in only one narrow pedestrian sidewalk along its eastern edge. We can subtract at least one lane of traffic to introduce new potentials and expansion opportunities. But while reducing the lanes of traffic is key to the Drive’s re-design, the real potential is to re-imagine the Drive’s relationship to High Park.

As is typically the case in Toronto parks, the perimeters are ignored—most of High Park’s elements and amenities are located in its centre. This requires a rethinking of what elements, programs and landscapes are capable of performing along this edge. The edge of High Park needs to be re-tabulated to balance the needs of cyclists, motorists and pedestrians, and must be equipped with new programs and amenities.

This new expansion into the adjacent park boundary would improve both street space and park space and provide benefits for not only the adjacent streets and neighbourhoods, but for the many people arriving from the subway and taking advantage of a new park edge and access points. The park as a city destination would be able to then overcome the spatial limitations of its current right of way and re-balance the needs of cars, transit, cyclists, and pedestrians in a more equitable distribution.

Park Entrances: Imagine not being able to access one side of Central Park in New York—or High Park in Toronto

How exactly do people from all across the city access High Park? In particular, how does a person arriving from the Keele Subway Station enter the park? Passengers arriving at Keele Station get off the train and enter into a long, almost windowless platform that squanders the opportunity for passengers to see any views of High Park. Long expanses of the precast bridge could be opened to surrender a commanding view of the park and Parkside Drive down toward the Waterfront. Currently, as passengers exit Keele subway station, they encounter a lifeless space underneath the bridge.

The south-west corner of the Bloor-Parkside intersection has an opening into the Park, which requires two points of crossing to access. While this corner is a marked entrance into the park, there is no corresponding access south on Parkside Drive—it’s not particularly clear south of Bloor what choices of entrance are offered to the park visitor.

Although the residential frontages on the eastern side of Parkside Drive are interesting, the sidewalk is extraordinarily narrow. What alternatives are offered to access the park other than walking as far south as it requires to encounter a crosswalk? Where possible, the east-west residential streets adjacent Parkside Drive must extend into the park. Distinct paving and material markings would clearly communicate this pedestrian crossing zone, encouraging drivers to slow down.

While there are some stretches of formal sidewalk on the western side of Parkside Drive, they are discontinuous, becoming dirt paths. Dispersed between the expansions of open meadows are thickly treed edges with dramatic grade changes, creating an unsafe, un-walkable edge. There are numerous unmarked, informal entrances points into the sharply steeped park edge without stairs, landings, or railings. These conditions clearly do not facilitate safe or easy access into High Park along Parkside Drive. Generally speaking, Parkside Drive has no relationship with or connection to High Park. The Parkside Drive re-design is not simply a question of the communities living adjacent the Drive, but a question of making High Park a safer and more accessible City Destination.

Safe cycling lanes on Parkside Drive are fundamental. We propose a wide, two-way cycling lane that can open up better ways of connecting into the park. At a detail scale, the combined cycling route is raised and separated from the adjacent road. This asphalt track intersects with new concrete surfaces that register and mark the east-west streets. The raised edges of the cycling track then are separated from the park by a line of trees, bollards, lighting poles, and a concrete curb. The remaining space forms the pedestrian walkway.

Howard Park Avenue cuts diagonally across Parkside Drive, extending into the High Park Loop, the Carleton 506 streetcar route’s terminal station. Parallel to the streetcar tracks, Howard Park Avenue extends into the park with an asphalt surface and raised concrete curbs, but it is reserved for service and emergency vehicles. Forming a third parallel “string” of movement, a pedestrian sidewalk also leads toward the streetcar stop and park, but discontinues before connecting to any internal pathways of the park.

The Loop itself is a semi-circular space with a washroom building that doubles as a streetcar stop. Here, a handful of TTC users can wait under a small canopy. There is one bench and a fountain to acknowledge this area as a public space. The washroom building, notwithstanding its crude design and locked doors, needs to be redesigned to rise to the occasion of a significant public park entrance. We must rethink the entire space around the Loop and consolidate the separate “strings” of movement. This would create a qualitative new organization that facilitates a proper connection between Parkside Drive, the High Park Loop, and the park itself.

The existing pedestrian pathway could form the alignment of a new shade canopy off Parkside Drive. This “event canopy” would connect to a new, expanded public washroom, gardens, and an entrance courtyard into the park. These urban design improvements could make arriving in the park a more memorable, civic-scale moment. These changes would also introduce new programming potentials and business opportunities. The task is to create a set of new infrastructural elements that enrich the park’s history and future potentials.

Connecting High Park to the Waterfront: A City Building Challenge

The current series of highway interchanges at the bottom of Parkside Drive is exceptionally dangerous and clearly not designed for pedestrians. There is no proper linkage to the waterfront, only a series of dangerous traffic islands that act as “stepping stones” for pedestrians to use through speeding traffic.

Parkside Drive’s southern edge at Lakeshore Boulevard begs some serious questions—why is it that this interchange facilitates high speed transition from the highway onto Parkside Drive? What other forms of highway-to-street transitions could be imagined? What international examples or current practices can be brought to bear on this problem? Prospect Park in Brooklyn, New York has many parallels to this case. For example, Flatbush Avenue leads into a public entrance plaza before leading to Prospect Park proper, slowing down traffic. Dufferin Street in Toronto is another comparative precedent—where Dufferin transitions through the CNE, cars are forced to slow down. These examples suggest that a better “City Building Idea” needs to be entertained for Parkside Drive. The exchange where Parkside Drive encounters the Lakeshore Boulevard must be re-imagined as a city space with better, safer access to the Waterfront.

There needs to be a solution for the entanglement of highway interchanges at Parkside Drive’s most southern point and a way to connect to the Waterfront. The best strategy may be to side-step a re-design of this convoluted interchange with an alternative approach. We are suggesting an elevated pedestrian walkway that travels over the highway infrastructure and arrives at a new Waterfront facility. This bridge would ensure a safe connection from High Park to the Waterfront.