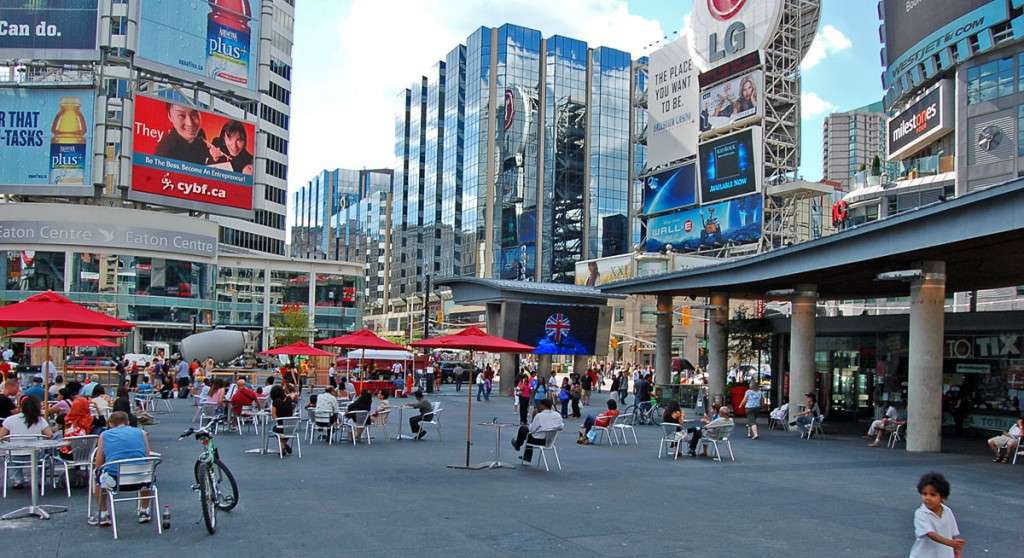 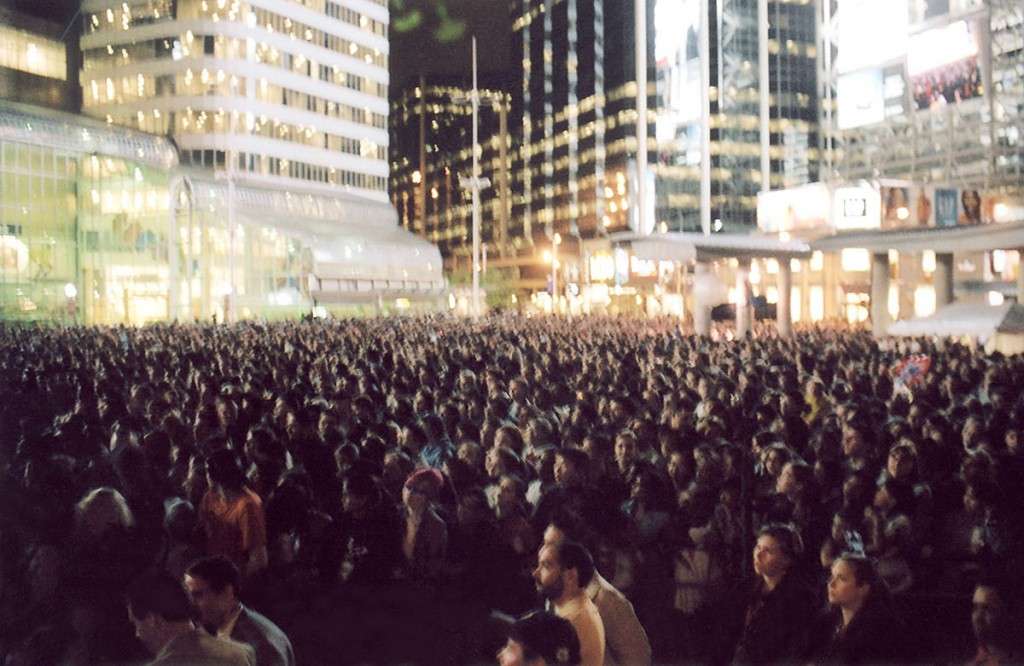 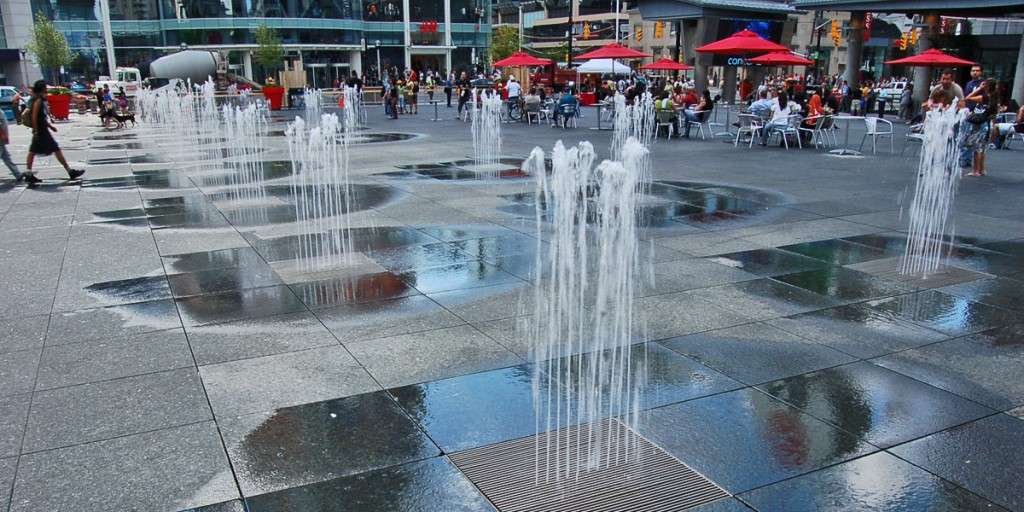 Yonge + Dundas Square was conceived as a new civic space in the centre of downtown Toronto.  It is located at the crossroads of Yonge Street and Dundas Street, one of the most prominent intersections in the city.  The project was conceived as part of a larger urban idea to revitalize an area that had fallen into decay over several decades.  Built on expropriated land, the Square became the catalyst for a number of developments around it and is itself intended to transform and adapt to its emerging context.

The design for Yonge + Dundas Square was awarded to Brown + Storey Architects Inc. through an international two-stage design competition sponsored by the City of Toronto. The Square is located above a parking garage, (designed and built by others). The context of the Square, and its modest size – slightly less than an acre – led to the design of a simple, distinctive ground plane that would act as an autonomous space in the face of its distinctive but disparate edges. This plane is bowed between Yonge Street to the west, and Victoria Street to the east, to an overall rise of 1.5 metres – reached at a consistently applied standard sidewalk slope – and clad entirely in a granite lattice.

At the Yonge and Dundas intersection, an aperture of space is defined by an open stainless steel grid. Within this space will be located a major stair entrance into the expanded subway platform below, the parking and handicapped access structure, a rush ticket facility, and a corner landmark “marquee”. The aperture is designed to bring light up into the threshold of the Square. The corner canopy is continued along the Dundas Street edge to the north with a longer canopy “armature” with a single line of columns and an expansive wood and zinc roof. The armature acts as an ameliorating structure between the Square and the large theatre complex planned to the north. The armature is terminated at the east end of the site, creating a gateway with a new generous crossing at Victoria Street into the Ryerson Polytechnic University campus.

The Ryerson University gateway of the armature folds into the eastern face of the Square, alongside a garden and sitting area, fountain and raised plinth. The plinth is an inclined stone plate raised above the vehicular access to the parking garage. The elevation of the bowed granite surface of the Square achieves a clearance that allows the plinth to act as both roof to the parking access and a suitable sitting height along its edge. The raised plinth will also be used for small to mid-sized performances and events.  It will be covered with a permanent curving glass canopy that will be built in the next phase of construction.

The urban character of the buildings along the south side of the Square has resulted in the narrowing of the adjoining street from 11 meters to 5.5 meters. This has allowed the creation of a more urban setting for landscaping, fountains, steps and seating areas. The linear fountains are placed as a double alleé of water jets across the bowed surface of the Square. These geysers are flush to the surface, so that when they are not being used, the entire surface of the Square is available for special events. The fountains are bordered by a striation of landscaping and seating edges, next to steps which border the street. Three light masts – 18 meters high – line the south side of the site, providing special lighting, and spaces for large banners and screens.

In August 2013, Yonge-Dundas Square celebrated its tenth anniversary. Controversial at its opening, it is now lauded as a flexible and crucial civic space at the retail heart of Toronto.

Yonge-Dundas Square in the Media

How I learned to stop worrying and love Yonge-Dundas Square

It works because it doesn’t get in the way by trying to be the big attraction itself—at least not usually. It’s a showcase, not just for the ads and its neighbours, but for the citizens of the city who fill the big empty space with their bodies and their laughter and their energy. Everything else is just a complement to the one feature that truly defines the square’s success as a civic space. One decade later, it turns out to be a monument to people. To us. To Toronto.
— Edward Keenan, The Grid, August 7, 2013

When [Dundas Square] officially opened 10 years ago this week, it was widely criticized for not being a park. Well, no, it’s not a park, and was never meant to be. It is a square, a form with which Torontonians have had little experience. And although programmed within an inch of its life, this is the best place in the city to sit and watch the passing parade.
— Christopher Hume, Toronto Star, May 31, 2013

Hip and sophisticated? Say hello to the new T.O.

The square (on the southeast corner of Yonge and Dundas Sts.) is one of the most powerful signs that Toronto has come of age. This is the city at its most European, its most urban and sophisticated. This is one of those rare occasions where Toronto gets to celebrate Toronto, where form and function merge into one seamless urban whole.
— Christopher Hume, Toronto Star, June 26, 2008

"The chief quality of that space is that it is a space," says Storey. "Yonge and Dundas Square has asserted itself already as the centre of the city. It is a popular centre to the city, as opposed to the institutional centre."
— Wiley Norvell, EYE Magazine, June 12, 2003

Square’s beauty lies in public life it will inspire

"It may take three, four or even five centuries before the first historian sits down to write the story of Dundas Square - or whatever that now-new space, Toronto's most generous gift to itself at the turn of the 21st century, might be called by that time. But there's no question it will happen. The apparent barrenness that so many observers now deplore will quickly disappear as the lifeblood of the city floods the new square's beautiful granite paving stones."
— John Barber, Globe and Mail, May 31, 2003

Toronto gets hip to new square

The intention was to halt the desperate downward slide of the neighbourhood. Even before the square is complete, that regeneration has begun; nearby buildings have been refurbish, new ones planned and even the Eaton Centre will shortly get a major facelift. More important, though, Yonge-Dundas will change what it means to live in Toronto, and to some extent, what it means to be a Torontonian. It will give us new ways to inhabit the city, to enjoy it and make it our own.
— Christopher Hume, Toronto Star, May 30, 2003

Dundas Square opened quietly last November but it really become part of the city yesterday, when tens of thousands showed up to protest the looming war on Iraq... Sitting on the southeast corner of Yonge and Dundas, the relatively confined space of Dundas Square seemed to expand to accommodate the growing crowd... By contrast, Metro Square, where the peace march ended, failed in its role as a civic venue... Location may lie at the heart of [Dundas Square's] vitality, but there's more to it than that. What yesterday revealed was just how well the space is integrated into the urban fabric.
— Christopher Hume, Toronto Star, February 16, 2003

James Brown: "We wanted to avoid an overly determined approach and create only the elements needed to make it work. Some people have perceived this as a lack of embellishment, but an architect isn't a makeup artist for the city."
— Christopher Hume, Toronto Star, January 18, 2003

Even surrounded by wooden hoardings, the square represents a huge improvement. When they finally come down this summer, the corner of Dundas and Yonge will be well along the road to recovery.
— Christopher Hume, Toronto Star, March 28, 2002

"We picked Brown and Storey's design because of its restraint and serenity," says Soskolne, who organized the international competition that attracted dozens of high-calibre contenders. "Its modernity is a brilliant foil to the pop culture that surrounds it." ... People from all walks of life will connect as they pass through the square, coming off the subway, on their way to work, to the theatre, to shop, to enjoy the city. What's most interesting about the square, Brown adds, is "what it allows people to do... here, time and occasion have priority over space."
— Judy Steed, Toronto Star, March 18, 2002

The winning design for Dundas Square... offers a calm eye at the centre of the razzle-dazzle storm heading for Dundas and Yonge.
— Pamela Young, Globe and Mail, January 2, 1999

Yonge Street has long been considered Toronto and Canada’s most important retail corridor. Yonge-Dundas Square emerged from the Yonge Street Regeneration Project initiated in 1996. A major new public gathering space, Yonge-Dundas Square sits atop a parking garage on a site nestled within an irregularity in the city’s street grid, on the corner of Canada’s busiest urban intersection, and surrounded by high-profile retail and cultural destinations. A two-stage, international design competition held in 1998 selected a winning proposal led by Brown+Storey Architects to build the new public square.